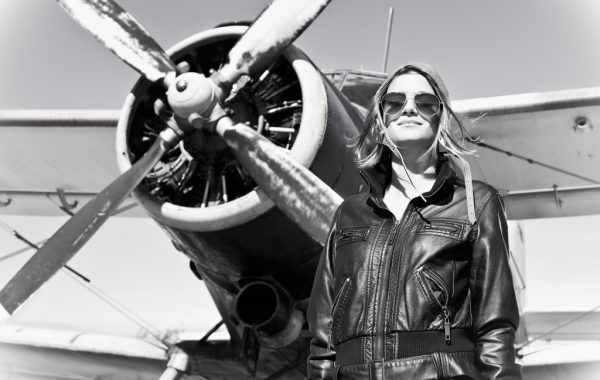 From 1942-1944, women piloted the majority of combat aircraft flown within the United States. World War II was raging in both the European and Pacific theaters, and the U.S. military needed every male pilot they could train for service overseas. Rosie the Riveter called thousands of women to the wartime factories, and someone needed to fly the aircraft from the end of the assembly line to military bases across the U.S.

“This is not a time when women should be patient,” Eleanor Roosevelt declared. “We are in a war, and we need to fight it with all of our ability and every weapon possible.  Women pilots, in this particular case, are a weapon waiting to be used.” More than 1,100 women answered the call to join the Women’s Air Force Service Pilots, or WASP, and thirty-eight of them died in service to their country.

Despite the best efforts of Love and Cochran, the army never granted the WASP military status while the program was active. Consequently, the women were often required to pay their own travel expenses between assignments, and the families of the women killed in training accidents and ferrying flights had to pay to have the bodies delivered home.

As WWII wound down in Europe and stateside male flight trainers were no longer needed to train new male pilots for the front, public and Congressional opinion of the WASP program began to change. The flight trainers, concerned they would be drafted into the Army’s ground forces, began a letter writing campaign to Congress and the media insisting they were entitled to the jobs the WASP were doing.

Public support for the program plummeted as people believed the female pilots were no longer freeing up men to fight but were now taking jobs that rightfully belonged to men. The WASP program officially ended December 20, 1944, and the women went home.

After the war, the Army classified the program and sealed the records, and the WASP faded from public memory. Then in the 1970’s the Air Force announced it would allow women into their pilot training program, igniting a media firestorm about the first female pilots in the United States military.

The WASP were having none of that and demanded their group be recognized for their contributions to the war effort in the 1940s. In 1977, Congress passed and President Jimmy Carter signed legislation granting former WASP veterans status and limited benefits. They were awarded World War II Victory Medals in 1984 and Congressional Gold Medals in 2009.

In 2010, President Barack Obama signed bipartisan legislation—introduced by Senator Barbara Mikulski in the Senate and pushed by then-Representative Martha McSally in the House—granting former WASP the right to be buried at Arlington National Cemetery.

The WASP’s contribution to the war effort was invaluable, but their professionalism and fierce determination did even more to open the door for future women in military aviation in the United States. Senator Martha McSally, as the nation’s first female fighter pilot to fly in combat and first female commander of a fighter squadron, is their direct descendent as is Sally Ride, the first American woman in space.

We all owe them a debt of gratitude—even those of us decidedly earthbound—for having the courage to push beyond what many deemed possible for women in flight and the determination to prove their detractors wrong. Our daughters have wider horizons because of their efforts.