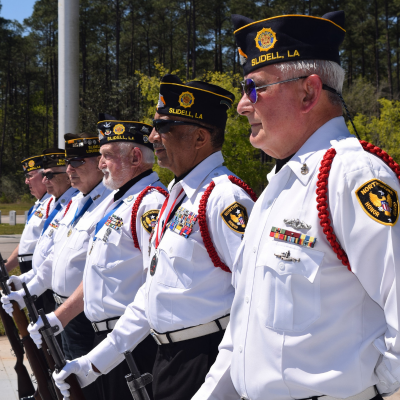 SLIDELL, La. – “Duty, Honor, Country” — those three hallowed words reverently dictate what you ought to be, what you can be, what you will be. They are your rallying point to build courage when courage seems to fail, to regain faith when there seems to be little cause for faith, to create hope when hope becomes forlorn. – Gen. Douglas McArthur

Those three hallowed words can also be used to describe members of the North Shore Honor Guard who volunteer to render military honors at the Louisiana Department of Veterans Affairs (LDVA) Southeast Louisiana Veterans Cemetery (SELVC) located in Slidell.

Military honors at a funeral are available for military members who died while on active duty service or in the Selected Reserve. Additionally, honorably discharged veterans who served on active duty or in the Selected Reserve as well as former military members who completed at least one term of enlistment or term of obligated service in the Reserves are eligible. More information about funeral honors eligibility can be found through the Department of Defense.

The North Shore Honor Guard is associated with American Legion Post #185. The matriarch of the group is U.S. Army WWII veteran Chester David who helped start the honor guard approximately 30 years ago in St. Tammany Parish.

This all-volunteer group is committed to honoring fellow veterans. Last year the team members, who are all veterans, hit a milestone when they rendered honors at the funerals of 93 of their fallen brothers- and sisters-in-arms.

“When we first started doing this, there really weren’t any services like this available for veterans,” says Smallwood. He has been a team member for the past 20 years and has helped honor veterans with one of the best-known military traditions, the 21-gun salute.

The 21-gun salute is a long-standing military tradition to honor the dead by showing that their weapons were no longer hostile. Whereas naval fleets traditionally discharge seven rounds in commemoration, their on-land counterparts were able to shoot three times as many for a total of 21.

However, at most military funerals what many mistake for a 21-gun salute is actually an honor guard team firing three volleys from rifles. This tradition comes from traditional battle ceasefires where each side would clear the dead. The firing of three volleys indicated the dead were cleared and properly cared for.

The North Shore Honor Guard do not incur costs for their bullets as those are donated to them by the military. They do accept donations, but do not solicit them.

“I consider it an honor to be here, and to be a part of this organization,” says Smallwood.

The North Shore Honor Guard can be reached at: dallasq@gmail.com.