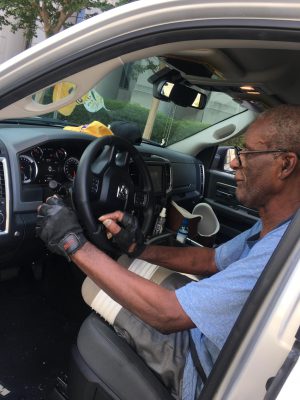 BATON ROUGE, La. – “Jesus Take the Wheel” is not just the title of a popular country song, it is also the deep-seated belief that kept a determined Vietnam Veteran on the road to regaining his independence.

Ivan Gaines volunteered to fight in the Vietnam War when he was 19 years old. He served his country honorably for two years as a machine gunner in the 508th Infantry Regiment.

Raised by St. Joseph House of Prayer Ministers Eddie Coleman, Sr., and Daisy Lee Coleman, he and his three siblings were taught at an early age the importance of being obedient and serving others.

“They were strict,” says Gaines of his parents. “We spent a lot of time with our church family,” which is what laid the foundation of his strong faith and would inspire him to eventually follow in their footsteps.

Gaines would marry Constance in 1969 and they had one son, Ivan Gaines, Jr., who tragically died at the age of 16 when caught in an undercurrent while swimming with friends in Thibodeaux, Louisiana.

Gaines admits that this was a very dark and painful period for his family, but the couple held on to their faith and to each other in order to persevere. The Gaines’ both serve as ministers at Hosanna First Assembly in Baton Rouge, Louisiana.

One of his few vices over the years, which helped him cope during difficult times, was smoking cigarettes. His smoking habit would eventually lead to the formation of major blood clots in both of his legs.

At the age of 72, the doctors at Our Lady of the Lake Hospital advised Gaines that in order to keep him alive, they had to remove both of his legs.

Of the tragic news, the ever-positive Gaines says, “This is just part of my testimony. There is no situation too big that God can’t handle.”

Gaines worked hard on his rehabilitation and adjusted as best as possible to his new normal. He did not want the loss of his legs to define him and did everything in his power to return to his customary routines.

In fact, he was so determined to regain his sense of normalcy that he improvised a way to be able to drive himself and his wife, who suffers from dementia, to doctors’ appointments.

Gaines would resort to using a toilet plunger to help him press the gas and brake pedals in his truck when he had no one that could drive them.

It was during one of these ingenious driving adventures that he “drove” to the Louisiana Department of Veterans Affairs (LDVA) headquarters offices and first met LDVA Cemeteries Program Director Billy Robbins.

“The Lord will send you in the direction he wants you and it led me to Mr. Billy and to the LDVA,” says Gaines.

Robbins was a staunch advocate for Gaines and helped set up a meeting for him with LDVA Secretary Joey Strickland. “COL Strickland said he didn’t understand why the Department of Veterans Affairs wouldn’t cover the costs of the adaptive equipment I needed for my vehicle. He said he could guarantee me that his Department would help me, and they did!”

LDVA team members helped Gaines with the application and documentation process needed for the Military Family Assistance (MFA) Fund. The MFA can provide financial support to Louisiana Veterans and their families when they experience financial hardships.

“It was our privilege to help Mr. Gaines regain his independence,” says MFA Administrator and LDVA Deputy Assistant Secretary of Benefits Vanessa Melancon.

Gaines admits that its wasn’t easy to get around before LDVA’s MFA Fund was able to cover the costs associated with updating his truck. He’d gone to school and was certified to use adaptive equipment, but could not afford to pay for the needed installation so he had to improvise in order to survive.

“This has been a life changer for me,” says Gaines as he shows off the new way he can safely drive himself around. “It feels good to be able to drive around like normal again and to continue to do God’s work.”

To Veterans that may be struggling, Gaines advises, “Keep going, keep the faith, and always put God first.”

Gaines has embraced his new normal with grace and humility and says that others can as well. “I know this for sure, if you’re serious about getting things done, go and talk to the LDVA. Take the good Lord with you when you do because the people at the LDVA will listen and make good on their promise to help us Veterans.”

To find out how you can help support LDVA’s MFA Fund, please visit: MFA Fund.