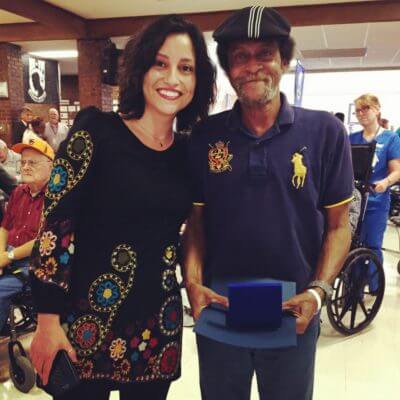 Alex Bowie – The #LaFlood directly affected over 171,000 veterans that lived in 20 of Louisiana’s 64 parishes during the catastrophic August floods. Among those vets that were rescued were Army Vietnam Veteran Alex Bowie and LDVA’s Communications Director and Air Force Veteran Alex Juan. The unlikely pair quickly bonded over their mutual loss, love of dogs and desire to help vets.

Bowie and Juan met when she and LDVA Deputy Assistant Secretary of Benefits, Al Leger, went to Celtic Studios, which was being used as a temporary shelter, to help veterans apply for Military Family Assistance Fund (MFA) emergency flood relief funds.

“Alex Bowie was the first vet to make me smile after the flood,” said Juan. “The trauma and loss were really weighing heavily on my heart at that time. But, talking to a vet that went through the exact same thing I did gave me hope. Alex had this big smile on his face and that made me smile. It’s hard to explain that connection to people that don’t have those shared experiences.”

Earlier this year, Louisiana Department Affairs Secretary Joey Strickland asked that Legislation be changed so that the Military Family Assistance Fund could be used to help any Louisiana veteran facing a financial hardship.

Governor John Bel Edwards signed HB 988 on May 26 and it went into effect on Aug. 1. Shortly afterwards, the MFA Board approved for up to $350,000.00 in emergency flood relief funds to be awarded to help the 171,000 veterans that were directly affected by the unprecedented flooding.

The LDVA team was able to get Bowie accepted in to LDVA’s Louisiana Veterans Home in Jackson, La., where Bowie is now a thriving resident.

The two vets were able to reunite on Nov. 16 when Secretary Strickland presented Louisiana Honor Medals to veterans at the Home.