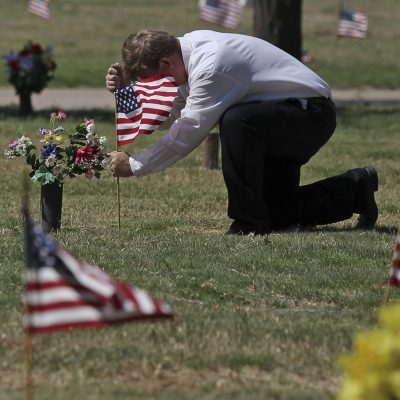 Veterans are twice as likely as civilians to die by suicide, the Department of Veterans Affairs said Monday in its latest report on suicide.

While the trend hasn’t changed since 2014, deaths by suicide are increasing among veterans just as they are in the general population, the VA found. Data for the study was obtained from the Centers for Disease Control and Prevention’s National Death Index.

“After adjusting for differences in age, the rate of suicide in 2015 was 2.1 times higher among veterans compared with nonveteran adults,” the report reads. Data for 2015 was the latest complete set of numbers available.

Veterans make up more than 14 percent of all suicides, although they account for only 8 percent of the total population, the VA report said.

The rate was 1.3 times higher for male veterans compared with civilians and twice as high for female vets, the report found.

“In 2015, an average of 20.6 active-duty service members, non-activated Guard or Reserve members, and other veterans died by suicide each day,” it said.

Suicides are up across the country. Report after report finds that they are becoming more common among men, women and children. It’s not clear why, but psychiatrists and suicide experts say it’s probably a combination of factors — a lack of access to mental health care, a growing sense of disconnection in society, economic woes and relationship problems.

At least one study showed that among veterans, quick turnarounds between deployments, or deploying military personnel too early, raised the risk of suicide.

Guns were used in two-thirds of suicides by veterans in 2015. Having access to firearms raises the risk of suicide, experts have found.

Related: Listening is one good way to help prevent suicide