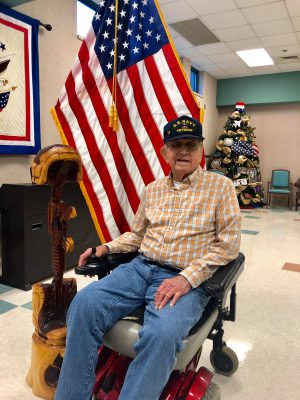 JENNINGS, La. – “Investigate and shoot down all snoopers — not vindictively, but in a friendly sort of way.” — Fleet Admiral William “Bull” Halsey, Jr., United States Navy.

“I wanted to go on submarines,” says U.S. Navy WWII veteran Walman Joseph “Chi” Higginbotham about the time he spent in service to our country. He is now a resident at Louisiana Department of Veterans Affairs (LDVA) Southwest Louisiana Veterans Home (SWLVH) in Jennings, Louisiana.

Born in China, Texas on Jan. 19, 1926, Higginbotham was one of two sons born to Walter and Esther who both worked on the family’s property. His father was a “rice and cattle man.”

“My grandfather started the Beaumont Rice Marsh,” he says. “He used 80 mules to help drain 10,000 acres of marshland.” The family started raising cattle, but ended up going broke. “We rebuilt, and then it happened again in the 40’s,” he says. According to Higginbotham, that’s part of what motivated him to enlist.

Higginbotham enlisted on Dec. 26, 1944 and completed his Recruit Training in San Diego, California. “I played all the sports, honey,” he says of his high school athlete days. Being in peak physical condition is what helped him seamlessly navigate through basic.

His brother, Walfred, took a different path. “He was a daredevil,” he says of U.S. Army Paratrooper brother. “He was one of the first to jump Rhine River, and ended up being trapped in Germany for 101 days.” With pride in his eyes, Higginbotham goes on to say, “Gen. Patton ended up getting him out of there.”

The Higginbotham brothers’ military careers paths took them to unknown places all over the world. “We didn’t see each other for five years because he was in Europe and I was in the Pacific,” he says.

Higginbotham would serve on the USS Malabar, an Adria refrigerated cargo ship, during WWII. This Type R ship, also called a reefer ship, was used to transport perishable commodities which require temperature-controlled transportation, such as fruit, meat, fish, vegetables, dairy products and other foods.

“We got hit while sailing past the Pacific island of Chichi Jima,” he says nonchalantly.  Higginbotham was in the process of refilling a CO2 bottle when the ship was hit and that bottle would break and then crush his feet. Those injuries would lead to the development of “jungle rash” which is a lesion or ulcer often initiated by minor trauma. Service members with poor nutrition are at higher risk of developing these very painful ‘tropical ulcers.’

Unfortunately, the Navy was not able to get him off the ship and to a medical facility. “I’m glad they kept me onboard while injured because I got to see a lot when we went through the Panama Canal,” says Higginbotham.

For his service during WWII, Higginbotham earned the American Theatre Medal, the Asiatic Pacific Medal, and the Victory Medal.

After being honorably discharged from the Navy, he met and married his first wife with whom he raised four daughters. The two spent 26 years together.

His second marriage was good, and he says they spent 38 years together.

Two years ago, his declining health led him to his new home at LDVA’s SWLVH in Jennings, La. “Honey, I couldn’t have found a better place,” he says of the place where he’s made friends and a lasting impact on the people that have the honor of caring for him today.

When asked if he’s looking forward to becoming a centenarian, he promptly replies, “I hope not. I’m tired, honey.”

We look forward to having you continue to be a part of our SWLVH family, Chi!