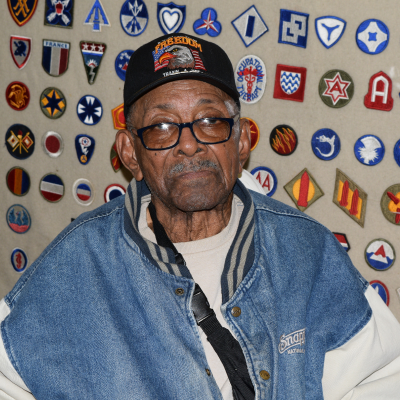 Jackson, La. – “Keep a beautiful smile on your face and the world will smile with you,” says U.S. Navy Veteran Willie Johnson. “If you frown up all the time, everybody else is going to frown up around you.”

Willie Johnson was born on April 17, 1924 to St. Claire and Maggiu Johnson in Pinckneyville, Mississippi. His father was a plumber and his mother was a housewife, but the Johnson’s worked as a unit to help provide for their family.

He was one of ten children, and the only one to be drafted into the U. S. Navy at the age of 18. He trained in Norfolk, Virginia for the StM rating which was responsible for taking charge of mess arrangements and serving at the officers’ mess table.

“I never had no racial problems in no kind of way,” says Johnson of his time in the military. “I just tried to follow the rules of the world.”

Johnson was assigned to the USS LST-483/Brewster County which was an LST-1-class tank landing ship built for the Navy during World War II. It was later renamed for Brewster County, Texas, and she was the only US Naval vessel to bear the name.

“When I first went aboard ship, I wasn’t assigned to any battle station,” says Johnson. He asked around, worked hard, and was eventually assigned to a 20-mm gun.

Johnson worked in the commissary department and helped “keep things going.” He worked hard to be put in a position of leadership where he “made sure people did their jobs.”

He was honorably discharged on Oct. 19, 1945 and returned to his hometown. His advice to those thinking of joining the service is, “I would definitely recommend you do it.” “You get a free education and get to see a lot of new scenery.”

Johnson met his future wife, Carrie, at a church function when she was 14-years-old. “We were married a great long time and raised a beautiful family together,” he says.

“I kept my family tradition alive,” says Johnson of his own large family. “We had 11 children.”

He worked as an overseer at a patrol mill in order to provide for his growing family. “I had a lot of mouths to feed, but I always had a good job and knew that God would provide.”

One of Johnson’s grandchildren followed in his military footsteps and is now a U.S. Marine. “My granddaughter is now a Master Sergeant in the Marines,” he says with a beam of pride in his eyes.

“All of the people here are so nice to us and always show us respect,” says Johnson of the LVH team members who he’s developed a good rapport with over the years.

“Breakfast has always been my best meal,” he says. “Although, there is no way I can eat all that food.”

When asked if he’s made friends at the home, he promptly replies, “Yes, indeed!” “Seems to me they love me and I love them,” he says of the fellow veterans he now spends his days with at the Jackson, La., home.