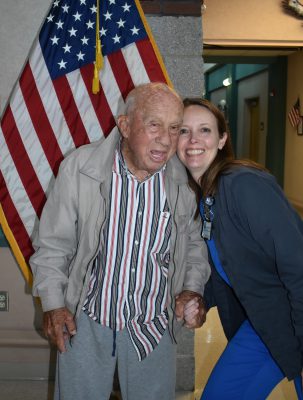 JENNINGS, La. – “I am a Navy veteran. I was born with my heart on my sleeve, fire in my soul, and a mouth I can’t control.” – Unknown.

U.S. Navy veteran Louis Jean “LJ” Mayeux, Jr. tells it like it is, and he doesn’t care if you like it. What he does care about is his family, his friends, being near the water, and the people who care for him at the Louisiana Department of Veterans Affairs (LDVA) Southwest Louisiana Veterans Home (SWLVH).

Born in Crowley, La., on June 2, 1929, Mayeux has always been strong-willed and was determined to be of service to others. He was raised by a father who was a lawyer, and a mother who worked as an economics teacher.

The Mayeux’s raised their three children to be independent thinkers that could take care of themselves, but would also look out for others.

His love of the water is what motivated him to volunteer to go on active-duty after having served in the U.S. Navy Reserves. “I really like the water,” says the former swim team member. “I like to fish, too.”

Mayeux was shipped to Recruit Training Command in Great Lakes, Illinois for boot camp. Their mission is “To transform civilians into smartly disciplined, physically fit, basically trained Sailors who are ready for follow-on training and service to the fleet while instilling in them the highest standards of Honor, Courage, and Commitment.”

“I put in for sea duty in boot camp so naturally, I didn’t get it,” he says in a tone that all service members understand since requests for specific duty stations are rarely fulfilled, and in the military, “hurry up and wait” is the norm.

His first duty station was the former U.S. Naval Station Tongue Point in Astoria, Oregon. “I got to watch the ships on dry dock while there,” he says.

After being stationed there for one-and-a-half years, Mayeux was sent to serve aboard USS Halsey Powell (DD-686), a Fletcher-class destroyer.  These were fast, maneuverable, long-endurance warships intended to escort larger vessels in a fleet, convoy, or battle group, and defend them against smaller powerful short-range attackers. “I slept on a destroyer for about two years,” says Mayeux while also fondly recalling the three months of ship maneuvers they did off of the coast of California.

Unfortunately, his time as a sailor came to an abrupt end when he was “left behind” prior to his ship’s next deployment. “The Navy dumped me in San Diego because I didn’t have enough time left on my enlistment in order to deploy with them to Korea,” says the salty sailor. “So I stayed drunk for about two months until they finally let me go home.”

Mayeux was honorably discharged from the Navy on July 26, 1954. His father helped get him a job with a major oil company, United Gas Corporation, immediately after he returned home. He went on to work at two other companies before finally starting his own business.

In 1957, he says his life changed for the better. He met and married the love of his life, Charlotte Chambers. The two love birds had five children in less than five years, and two other children four years later. The couple raised a total of five daughters and two sons. They are now the proud grandparents of 31 grandchildren and eight great-grandchildren.

Mayeux became ill and the doctors said that he would never walk again, but this strong-willed sailor was determined to defy their odds. He worked hard, did physical therapy consistently for eight months, and can now stand and walk around with his walker.

The salty Navy veteran speaks highly of the men and women who care for him at LDVA’s SWLVH. “I would recommend these folks highly,” he says with a sweet smile. “Julie (Benoit) takes us on lots of outings, and they all take good care of us.”

We love taking care of you, LJ! We are happy that you are part of the LDVA family.