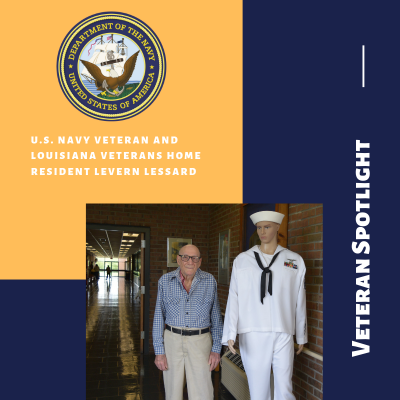 JACKSON, La. – It’s been said that a family that serves together, stays together, and the Lessard Family certainly did their part to keep our country safe and their family unit intact.

Lever Paul Lessard was born to Olabar and Leia Lessard on Feb. 3, 1923 in Gonzalez, La. He was one of 10 children who helped run the small Lessard farm. “In those days, everyone that lived on the farm worked on the farm from the time they were ten years old.”

Farm life was not easy, he admits, but you got used to the routines. “Certain things you had to do on a daily basis – for example, me and my brother has to do all of the milking,” he says. “We milked the cows and fed the chickens while our older brothers worked the fields.”

All of the Lessard boys, six out of the 10 children, joined the U.S. Armed Forces during WWII. The two oldest were drafted, the other four volunteered.

“I was at the draft age, but I volunteered to serve,” says Lessard. He was a trained welder at the time, but was sent to the Seabees by the U.S. Navy. “They were crying for cooks, so I volunteered to cook!”

Lessard was sent to Virginia where a new type of boot camp training was starting. At the time, there was a huge need for a new type of warrior called the “Seabee,” and in November 1942, the training center moved to Camp Peary outside Williamsburg, where more than 100,000 Seabees were born.

According to Lara Godbille, head of the U.S. Navy Seabee Museum in Port Hueneme, Calif., which was the largest West Coast construction training center during the war, “The Seabees went from zero to 325,000 — and that’s because nobody else had the skill sets they had.”

For advanced training, he was sent to Davisville, a village in the town of North Kingstown in Rhode Island that was formerly the home of the Davisville Naval Construction Battalion Center, which housed the U. S. Navy’s SeaBees.

After his Seabee training, Lessard was shipped to New Guinea and was assigned to the 150th Naval Construction Battalion that helped build supplemental barracks for transit personnel.

“I followed specific recipes to help feed a lot of Seabees,” says Lessard who had to use 35 lbs of meat per meal, in some cases. “You were supposed to follow those recipes because they were all proven meal builders designed to feed 100 people at a time.”

Lessard says that his fellow shipmates voted steaks as their favorite meal and those dreaded cold cuts as their least favorite meal. Regardless, his day would start at 4 a.m. and end at 9 p.m. every single day.

“After the war was over, I got out of the service,” says Lessard who was honorably discharged. For his service and dedication to our country, he earned a Good Conduct Medal, National Defense Medal, Asiatic Pacific Ribbon with one star, and an American Theater Philippine Liberation Ribbon with one star.

Shortly afterwards, Lessard says, “I met a local girl named Hilda Lavigne and I married her.” The couple had one daughter together prior to him being recalled into the Navy and being shipped out to the Philippines.

“At the time, it was against the law for any woman to divorce a service man without his consent, but Hilda did it anyway,” says Lessard who learned of his divorce while deployed.

Despite the heartache, Lessard traveled the world, worked hard in the Navy, and eventually remarries. “I married Vera Smith from Algiers, La., on March 2, 1960,” he says with a smile. “We never had any children together, but we loved each other for 43 years.”

The couple made military life work for them. He mostly operated out of the Norfolks, Va., area and she worked for the local retailer, Sears, Roebuck and Company.

“My unit resupplied the fleet out in the Mediterranean Sea for about six weeks at a time,” says Lessard.

He spent 21 years’ total serving his country, and he and his wife moved back home to Louisiana after his retirement. They purchased 30 acres in Denham Springs, Louisiana, and built their home there. He took a job at a parts company that supplied big factories with gauges.

Lessard says that given the opportunity, he would rejoin the Navy again. “It was a good life, theoretically speaking,” he says. “I was away from home a lot, but I traveled almost every sea in the world.”

He’s been living at the Louisiana Department of Veterans Affairs Louisiana Veterans Home in Jackson, La., for about two months now. “I didn’t have any place to live by myself so I figured this was the best place to live,” he says. “I like it here!”

Lessard has even been able to reconnect with a guy he says grew up about one mile from him. “My (childhood) friend turned 75 a few days ago,” he says with a sly smile. “I pick at him and say: You little kids need to grow up already!”

“Nobody believes that I’m 96,” says Lessard. “I just eat right and don’t drink or anything like that. I guess that’s part of good living.”