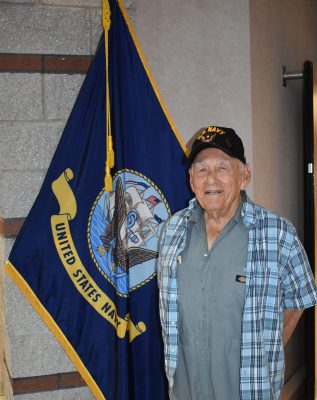 JENNINGS, La. – Life has not always been easy for Lawrence Joseph “LJ” Menard, but that has not stopped him from sharing his contagious smile with everyone he meets. The U.S. Navy veteran now resides at the Louisiana Department of Veterans Affairs (LDVA) Southwest Louisiana Veterans Home (SWLVH) in Jennings, Louisiana.

Born in Orange, Texas on Sept. 28, 1927, he was the only child of Clifford “CJ” and Rena Menard. He knew early on that he wanted to be of service to others.  His father worked in the oil field while his mother stayed home to care for him. His parents raised him “right,” and he wanted to do his part, he says.

On July 12, 1945, at the age of seventeen, a young Menard volunteered to enter into the Navy’s active service. He went to California where he would spend the next nine weeks in basic training at Naval Training Center San Diego.

Afterwards, Menard received technical expertise and training for munitions, explosives safety, and hazardous materials. He spent his time in the military “delivering the bad ammo out to the sea.”

“They just sunk it all,” he says of the days he spent on that mission. He would go on to help decommission ships. “That was something else,” he recalls.

“Every once in a while, we’d get lucky and come across some sugar,” he recalls with that bright gleam in his eyes. “Sugar was precious back then!”

“Do you know what we’d do with it?” he continues. “We would bring it to the local bar and they’d give us free beers for it!”

“My parents thought I would go to college, but I met a little lady from Jennings, La. named Gloria and I married her instead,” he says of life after service.

The Menard’s had one daughter together who was tragically killed in an accident. They remained married for over fifty years.

“I worked in the oil field for a while,” he says. “Then I worked for Gulf State Utilities as a meter reader and eventually a collections supervisor.”

When Gloria passed away, Menard said he adopted a “Wine Women, and Song” lifestyle referencing the famous Loretta Lynn song of that time.

Menard would eventually meet his second wife, Francis, in Florida. The two have been married for 28 years and counting.

“She likes babysitting and is a very religious person,” he says of Francis.

Menard has been living at LDVA’s SWLVH for a while now. “I like it,” he says. However, he is quick to admit that he shoots straight with you when you ask him his opinion. “I don’t love it here though. I’d rather be home.”

As far as military service in concerned, the former Seaman says, “Do it!” “Where else can you stay 20 years, come out with a nice retirement, and still work to get another retirement?”

We are grateful to you for you service, generous smile, and honesty, LJ. We are happy to have you be a part of the LDVA family.