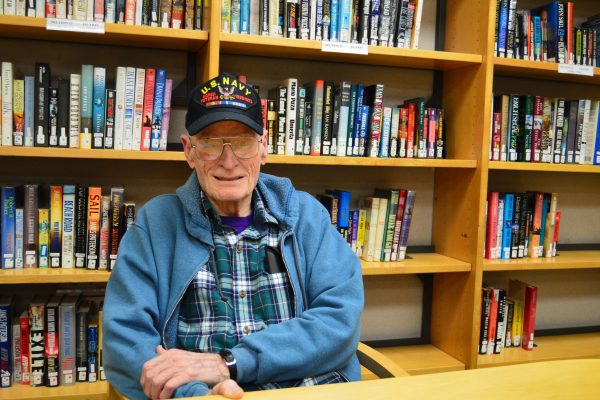 “It comes down to this: we’re pieces of equipment
To be counted and signed for.
On occasion some of us break down,
And those parts which can’t be salvaged
Are replaced with other GI parts, that’s all.”
– Rolando Hinojosa, Korean Love Songs From Klail City Death Trip

Gladden was born on April 19, 1930 in Shreveport, La., to Felix and Josie. His father was an electrician and his mother was a devoted housewife that cared for the two Gladden children.

He describes himself as a “runt” in high school compared to the “service men that came back from war and were playing sports.” Aside from being more muscular, these service men, according to Gladden, were also being given the few jobs that were available. “All the good jobs were taken up by the service men that were coming home from war.”

So he did what he thought he had to do in order to find a living wage. “I joined the reserves right out of high school,” says Gladden.

“My friend said he was going to join the Navy,” he says. “So I went over there the next day, but my friend never showed up.” That’s how Gladden joined the active-duty forces.

He enlisted on Sept. 24, 1948, spent 16 weeks in Pipe-Fitter School at the U. S. Naval Training Center, San Diego after completing his time in the Recruit Training Command.

“I was sent over to Kwajalein,” Gladden says nonchalantly. “It was in the South Pacific.

Kwajalein Atoll was converted into a staging area for campaigns in the advance on the Japanese homeland in the Pacific War. After the war ended, the U. S. used it as a main command center and preparation base in 1946 for Operation Crossroads, the first of several series of nuclear tests (comprising a total of 67 blasts) at the Marshall island atolls of Bikini and Enewetak.

Gladden was trained to be a U.S Navy Ship Sanitation Inspector. “I had to go around spraying DDT,” he says of his time spent overseas. According to the U.S. Environmental Protection Agency, DDT (dichloro-diphenyl-trichloroethane) was developed as the first of the modern synthetic insecticides in the 1940s. It was initially used with great effect to combat malaria, typhus, and the other insect-borne human diseases among both military and civilian populations. It also was effective for insect control in crop and livestock production, institutions, homes, and gardens.

In 1972, EPA issued a cancellation order for DDT based on its adverse environmental effects, such as those to wildlife, as well as its potential human health risks. As a result, today, DDT is classified as a probable human carcinogen by U.S. and international authorities.

Gladden was then sent back stateside to the U.S. Naval Training Station, San Diego where he was scheduled to complete a rigorous underwater demolition training program.

The Underwater Demolition Team combat swimmers formed in December 1944. They conducted hydrographic reconnaissance and demolition of obstacles before amphibious landings throughout the Pacific.

Unfortunately, Gladden says he was “dropped” after he’d successfully completed some of the worst parts of that training. He was honorably discharged after serving for six years, four months, and three days.

He went back home to Shreveport where both his father and brother were now electricians. “I took my test and got into the electrical trade.”

“I’m not a drinking man or anything like that,” says Gladden. “But, I liked to roller skate.” During that time, roller skating was everywhere.

According to the National Toy Hall of Fame, in the 1950s, the baby boom generation made roller skating, described as “wholesome fun for everybody” a popular suburban pastime.

“I met a little gal from Pearl Harbor at the skating rink,” says Gladden with a sly smile. “We enjoyed dance skating together.” They married, but that did not last. “I tried it (marriage) once,” he says matter-of-factly. “It’s not for me.”

Gladden never had kids of his own, but did well for himself while working in both the electrical and paper mill industries. Once he got to the point that he could no longer care for himself, he gave his home and boat away to some friends and moved into LDVA’s NWLVH.

He’s lived at the Bossier City, La., home for one and a half years now and enjoys his friendships with fellow Korean War veterans, feeding the white fish in the pond, playing bingo, and flexing his athletic skills during their competitive bean ball baseball tournaments.