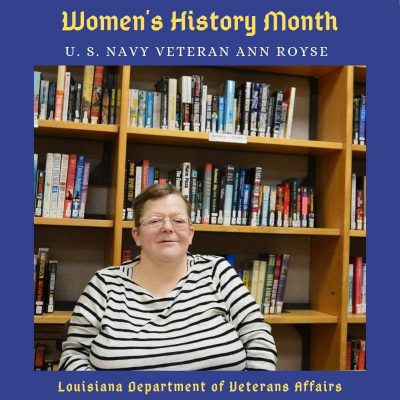 BOSSIER CITY, La. = “How important it is for us to recognize and celebrate our heroes and she-roes.” Maya Angelou

Today, we recognize and celebrate the life of U.S. Navy Veteran Ann Elizabeth Royse, who now resides at the Louisiana Department of Veterans Affairs (LDVA) Northwest Louisiana Veterans Home (NWLVH) in Bossier City, La., and is grateful for the opportunity to have served her country in the 70s.

Royse was born on Aug. 10, 1953 in Wichita, Kansas. According to Only in Your State, “Kansas during the 1950s was a memorable time—a Kansas boy was Commander-in-Chief, TVs were becoming a home staple and families were enjoying the post-war calm. These were peaceful and happy times for the Sunflower State.”

Royse was the only child of Nancy Ann Story, a single mother who dedicated her life to ensuring her daughter had everything she needed. The two were very close and overcame many obstacles, including young Royce’s unrelenting allergies, her need for glasses at 3 years-old, and several moves around the country for her mother to find work.

The family would eventually move to San Antonio, Texas, and that is where Royse made the decision to join to U.S. Navy. “They were a little more open minded,” she says of her decision to join that particular branch of service during a time when women weren’t widely accepted into male-dominated career fields.

“Mother liked that I wasn’t totally going out on my own,” she says of her mom’s reaction to having her only daughter joining the military in 1973. “She knew the military was going to take care of me if I was to get sick or hurt.”

Royse did well on her aptitude test and became a hospital corpsman. Hospital corpsmen have more education and training than the basic Emergency Medical Technician. They also perform duties as assistants in the prevention and treatment of disease and injury, and assist health care professionals in providing medical care to Navy people and their families.

“I had good days and I had bad days,” she says of her time working as a corpsman. She enjoyed caring for those that were hurting, but a particular case broke her heart.

“On that day, I could have cheerfully murdered a parent,” she says of the time she had to care for a six-month-old baby boy with a fractured skull and ribs.

Her team was able to stabilize and comfort the hurting infant. “He was the cutest little thing once we got him to stop hurting.”

Royse proudly served her country until her enlistment was up at the end of the Vietnam War. “I was told they were only keeping those that were outstanding in their fields so a lot of us were released from the service after the war.”

“I would have gladly continued to serve,” she says noting that she loved the Navy even though, during those times, women were not allowed to go on ships or into battle.

She was honorably discharged from the Navy and worked as a nurse’s aide, a janitor, and for the U.S. Census Bureau in the years that followed. Unfortunately, she inherited her family’s “long line of heart problems” and required medical attention often that left her living in low-income housing.

Royse would eventually find a home at LDVA’s NWLVH where she has been a resident for the past four years. She enjoys spending time with the other 10 female veteran residents.

“I like it here,” she says with an enthusiastic smile. “I like the people. We go on outings, shopping, to restaurants, and we all just get along.”

She recommends that other veterans who may be struggling with health problems on their own consider taking up residence at one of LDVA’s five world-class homes. “If you can’t take care of yourself, it’s good to be somewhere they can take good care of you.”