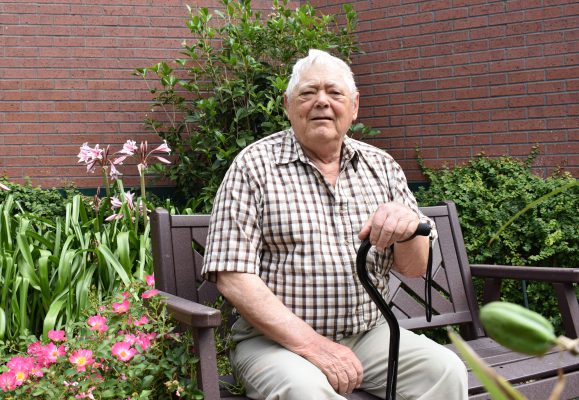 JENNINGS, La. – “I did what a Soldier does,” says U.S. Army Vietnam War veteran Jerry Vodicka who now resides at the Louisiana Department of Veterans Affairs (LDVA) Southwest Louisiana Veterans Home (SWLVH) in Jennings, Louisiana. And, Soldier On he did.

Born in Slovakia on June 2, 1937, he was of three children born to Vera, a single mother who worked as a housekeeper to keep food on the table for Jerry and his two sisters.

Slovakia, officially the Slovak Republic, is a landlocked country in Central Europe. It is bordered by Poland to the north, Ukraine to the east, Hungary to the south, Austria to the west, and the Czech Republic to the northwest.

When Vodicka was a child, there was a lot of unrest and poverty in his home country. At the age of 21, he joined the U.S. Army in Germany. “The borders were closed,” recalls Vodicka. “It was a communist country. I did what I needed to do.”

He was initially sent to Fort Jackson in South Carolina in order to attend language school. Vodicka would then move quickly through basic training, advanced individual training, infantry school, and was immediately sent to Korea.

“I did what a Soldier does,” he says nonchalantly. “My whole unit was nothing but a bunch of foreigners. Many escaped Hungary by joining the military.”

Vodicka did not mind the military lifestyle, but did miss his family. “I did not get to visit my family until they opened the borders.”

“I had one condition when they wanted to send me to Vietnam,” says Vodicka. “I go to Vietnam as American citizen – no questions asked.” He was adamant with the military judge who was reviewing his file. “Judge says yes so I go to Vietnam.”

Vodicka would do two combat tours with the 101st Airborne Division who were a specialized modular light infantry division of the U.S. Army trained for air assault operations.

Vodicka would also win another high distinction while stationed in Germany. He caught the eye of a young woman named Barbara. The two married, raised three children together as a military family until he retired, and would share over 55 years of marriage.

One of Vodicka’s daughters found LDVA’s SWVH when he needed help getting around, and he’s been a resident for a little over four months now.

“It’s alright,” he says of his new home. “I’m not a very sociable guy. I like being by myself. I do not like to depend on no one. But, I try to be active and I can do that here.”

Vodicka believes everyone should join the military at some point in their lives. “It would keep them out of trouble, change their lives 90% for the better, and change their attitude towards other people.”

We have to agree, Jerry. We love caring for veterans like you.