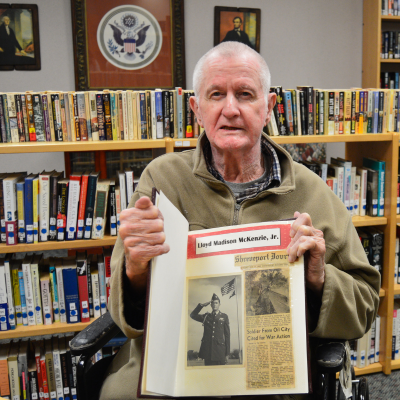 Originally from Oil City in Caddo Parish, McKenzie was drafted into the Army during the Vietnam War on April 8, 1965.

Asked what it felt like to be drafted during that time, he calmly responds, “It wasn’t fun.” McKenzie had a good job lined up after his college graduation, but made the best of the situation and served his country with both honor and distinction.

McKenzie says he was first trained in heavy weapons, but was moved to intelligence and reconnaissance work. “School helped,” says the non-traditional draftee who’d already earned his bachelor’s degree in history and geography from Louisiana Tech University.

He remembers being fascinated with Army tanks as a child, but never imagined what the reality of being in war would mean to him and his fellow Soldiers once they were drafted.

“I met guys from all over the country,” he says of his days in the military. McKenzie still keeps in touch with some of them today. “Humphries calls me all of the time,” he says of one of soldiers that served alongside of him. “Several of them became my brothers so we still keep in touch.”

There are also several moments that McKenzie has never forgotten. “I’ll never forget Jose Lopez,” he says with a glimmer of sadness in his eyes. “He was wounded really bad during a helicopter assault.”

McKenzie goes on to explain that Lopez received the “million dollar wound” that allowed you to go back home, albeit not the same.

“So many of these guys have gone to heaven now,” he says. “But, I’ll never forget any of them.

While McKenzie is humble about the things he saw and did, he did earn a Bronze Star with valor for his actions in Vietnam. His citation reads: “For heroism against a hostile armed force in the Republic of Vietnam. He distinguished himself by heroic actions between the hours of 0145 and 0430, 30 May 1966, when the Battalion Command Post was attacked by an estimated reinforced company employing small arms, automatic weapons, and 82mm mortars. Although a members of the Battalion Staff Platoon, he was in position directly behind a 60mm mortar squad of the reconnaissance platoon. As the intensity of the enemy attacks increased, the supply of mortar ammunition became critical. Realizing the seriousness of the situation, Private McKenzie voluntarily left his covered position to search for mortar ammunition. In spite of the darkness and confusion, he found the ammunition and began resupplying the mortar crew. At this point, line elements also were running low of ammunition. Again Private McKenzie returned to the supply point and delivered the desperately needed ammunition to the outer perimeter, during this entire period, he was subjected to intense enemy fire from small arms, automatic weapons, and mortars. This outstanding display of initiative, decisiveness, and personal bravery is in keeping with the highest standard of the military service and reflect great credit upon himself, his unit, and the United States Army.”

McKenzie was discharged Jan. 11, 1967. “When I first got out, man, nobody wanted to listen to us,” he recalls. “They would start asking us how many women and children we killed and it just wasn’t like that.” The Vietnam War is historically referred to as the longest and most unpopular war in which Americans ever fought.

“People really don’t understand what we went through over there,” says McKenzie. “Now I can tell a difference, especially here,” he says referring to the NWLVH.

“Everyone that comes and visit us here thanks me for my service,” says McKenzie with a smile. “It makes me feel proud of my service.”

He’s been a resident at the NWLVH for about two years now. “We all get along good here,” he says. “I can share stories with some of the Nam’ guys that are here, too.”

McKenzie also says that the activities department keeps them busy with an array of options. “I love playing bean bag baseball,” he says as he admits that the games can get competitive. They are all vets, after all.

Thank you for your service to our country, U.S. Army Pvt. Lloyd M. McKenzie, Jr.! It is our privilege to care for you and your fellow brothers and sisters-in-arms. Welcome home, Sir.