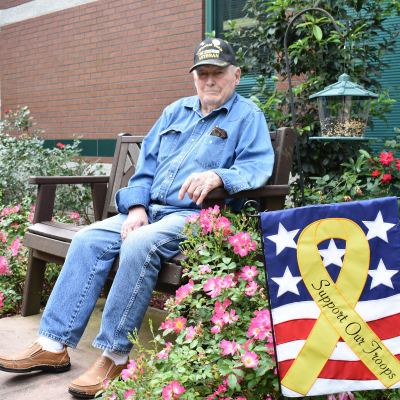 JENNINGS, La. – “A true hero isn’t measured by the size of his strength, but by the strength of his heart.” – Zeus

Sammy Lane Dowden, affectionately known as “Candy Man,” is not your average hero. The strength of his heart beats loudly and lovingly throughout the halls of the Louisiana Department of Veterans Affairs (LDVA) Southwest Louisiana Veterans Home (SWLVH) located in Jennings, Louisiana.

Born on May 4, 1933 in Florien, La., Dowden always had a heart for serving others. His parents, Furman and Mavis, were both educators that raised their six children to be selfless and kind. “Dad taught agriculture in high school and mom taught special needs kids.”

Out of the sense of duty that they instilled in him, Dowden signed up for the U.S. Army Reserves at the age of 17 in his hometown of Lake Charles, Louisiana.

“Every time I came home from the service, I had to get in my uniform, visit mom’s class room, and play with the children she was teaching,” he says.

“When the Korean War broke out, all us reservists without prior service got called up.” Dowden was a trained amphibious truck driver and was sent to Pusan, a major port at the southeastern tip of the Korean peninsula.

“I was asked to go find an amphibious truck and haul ammunition from there to the front lines,” says Dowden of his time in Korea. And, that is what he did until he was honorably discharged from the Army in 1953.

Dowden returned to his hometown and reconnected with the daughter of one of his father’s long-time friends, a girl named Doris. “She didn’t like me worth a flip, but I kept on after her, and she finally agreed to marry me!”

The couple was married from 1953-2016 and they raised a son, Danny Dowden, who served in the U.S. Marine Corps.

“Doris went all over the country and once to Japan with me,” says Dowden with a huge smile while explaining that he enlisted in the U.S. Air Force after getting married.

He was hurt while on active-duty, required a knee replacement, and eventually had to retire. “I didn’t want to retire,” says Dowden. “I loved my time in the service!”

He eventually adjusted to life as a civilian and they settled back in his hometown where they lived happily together until Doris’ death. “I got so bad off after my wife died that my son brought me here to SWLVH,” says Dowden.

He’s lived at the Jennings, La., home for three years. “They’re good to me here,” he says. Dowden loves handing out peppermint candy and is affectionately known as “Candy Man.”

“I go to Wal-Mart on one of those carts and chase the kids down so I can pass out candy,” he says with a sly smile. “I do it because I want to, and because it makes me happy.” He admits that he makes sure to get their parents’ permission before handing over any candy.

When he is not zooming through the candy aisles of his local Wal-Mart, Dowden is helping his fellow veterans at the home. “I’ve got friends all over this building,” he says confidently. “I try to help the guys in the wheelchairs. We play BINGO, and the guys enjoy that.”

Dowden has certainly made many friends over the years, and has made SWLVH his home. Several of his friends joked with him and requested their daily peppermint (or two) from him during the course of the interview.

“I’m going to brag on this community,” says Dowden. “This community supports our home. They are always doing something for us. I sure do enjoy it here.”