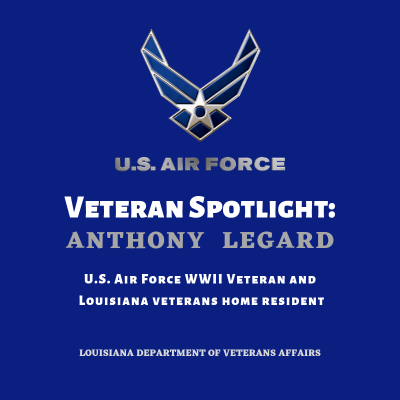 JACKSON, La. – U.S. Air Force Veteran Anthony Legard is used to being surrounded by a large family and he knows how to navigate among those families with ease.

The Louisiana Department of Veterans Affairs (LDVA) Louisiana Veterans Home (LVH) is now his residence, and his “family” is now made up of fellow brothers and sisters-in-arms.

Legard was born on Sept. 17, 1921 in Tickfaw, Louisiana. Tickfaw was founded in 1852, and is a village in Tangipahoa Parish. His parents, Harry Louis and Geneva Ferdinand Legard, raised nine children on a farm in that parish.

My family had a large farm were we grew strawberries, cotton, beans, peppers, and other things,” he says recalling the days of his youth. “We would go to the market with everything we had and utilize the proceeds of our sales to make our living.”

Legard is the baby in that he was the youngest of nine children, but he has fond memories of the days he spent on the 100-acre farm surrounded by his hard-working family.

Unfortunately, once WWII broke out, five out of the nine Legard children were drafted within a three-month period, and the family farm would eventually shut down.

“After my brothers got back from war, they had nothing to come back to,” he says. They all helped build their mom and dad a home in Hammond, La., where they would reside for the remainder of their days.

Legard was first sent to San Antonio, Texas for basic training and then to Denver, Colorado for mechanic school. His military occupational specialty was 965 auto repairman.

After completing his training, he was deployed to Guam for temporary work. “It was a joy,” he says of his time overseas. “I was ambitious. I was always a reader and had read of other places. I had just finished high school, too, so I had a good sense of geography.”

Having several family members serving all across the world had its advantages as well, he says. “My older brother had given me good advice after he returned home from the war.”

Legard says he “did my required three years,” and was honorably discharged on May 16, 1949. He then used the Montgomery G.I. Bill to attend Southern University where he studied education.

He met his future wife while at Southern. She was on the dance team and studying physical education.

“I would hang out at the recreation center and learned to dance just to get her attention,” he says. “We ended up becoming partners on the dance floor and in life.”

His dream of obtaining a higher education degree was short-lived though because “I made more money waiting tables than I did teaching.”

He changed dreams in order to better provide for his family. “My buddy helped me get a job at a chemical plant.”

The Legard’s would build a life together and raise three children. Their two daughters live in Texas and his son lives here in Louisiana.

Unfortunately, the love of his life passed away one year and two months ago. His doctor recommended that he not be alone so he came to live at LDVA’s LVH.

These veterans’ homes are located conveniently across the state in Jackson, Bossier City, Monroe, Reserve, and Jennings.

“Johnson made it his business for us to meet so I’ve made a lot of acquaintances now,” he says with a reserved smile while referencing U.S. Navy Veteran Willie Johnson.

“I’d rather be alone or reading a book than be forced into conversations that go on over and over again,” he says referring to some of the residents that tend to forget they’ve already shared a story with him. “Some of these become beyond beneficial conversations, that’s the conclusion I’ve drawn.”

“I would highly recommend to other vets that may be struggling to consider one of LDVA’s veteran’s homes,” says Legard, who admits his moving to the Jackson, La., home was a positive move. “You aren’t equipped to take care of your own needs the way they can here,” he says of the LVH.