Veteran given mortgage-free house to call home in Junction City 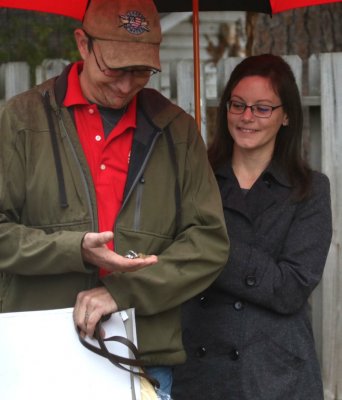 Joshua Droddy and his wife could only get out a combined five words before they held each other, sobbing, after walking into their new home.

The Droddys finally had somewhere to call their own.

Retired U.S. Army Sergeant Joshua Droddy and his family received a mortgage-free home in Junction City from the Military Warriors Support Foundation in partnership with Bank of America Nov. 21.

The foundation is a 501(c)(3) nonprofit charity founded in 2007 with the mission to “provide support and programs that facilitate a smooth and successful transition for our nation’s combat wounded heroes and Gold Star families,” according to its website.

Together with Bank of America in support of its Homes4WoundedHeroes initiative, the two have donated more than 2,400 homes nationwide, said Donnie Cook, Arkansas president for Bank of America.

Droddy joined the Louisiana National Guard in 2000 when he was 17 years old. He said no one in his family had been in the military before, but he felt it was his duty to serve his country.

While in boot camp, 9/11 happened, and Droddy said it shifted the way he and the other soldiers trained.

Droddy served a year-long tour in Iraq as lead driver from 2004 to 2005 doing route clearance missions.

“We just rode around all day waiting to be blown up,” Droddy said. “I know I say that jokingly, but by the time I left in October 2005, my vehicle had been hit by 13 roadside bombs and been in several ambushes.”

Droddy said no one warned him of the possible effects from blasts while driving around. He said it was only blasts because the people setting up the bombs either had them too far down in the ground or upside down. However, Droddy wasn’t free from injury, it just wasn’t as visible — it was in his brain.

When he returned to the states, Droddy knew something was wrong with him, but he wasn’t sure what.

The military didn’t yet recognize post-traumatic stress disorder, so Droddy was left with questions.

“They still deemed it as shell shock,” Droddy said. “It’s extremely scary [not having a label for what’s wrong with you]. Wake up each day not knowing, or it’s like you’re not yourself in your body. You feel yourself going through the motions of your day-to-day routine, but you’re not really present.”

Droddy said when he would come out of those dissociative episodes, he wouldn’t remember anything.

Being back was hard for Droddy, and it continued to get harder when he faced familial and marriage pressures. He said that’s when he went off the deep-end and got addicted to meth. He said he spent five years looking for his next fix. It wasn’t until 2011, when he and his first wife got a divorce and he moved back to Louisiana, that he got clean and started going to addiction therapy.

Droddy said he still deals with his PTSD, particularly when driving.

He said when that happens, he pulls over to the side of the road, takes a few minutes and breaths. He also lets his service dog, Roux, get in his lap and help him.

Droddy said he has better coping mechanisms now than he did when he first got back, including doing a lot of outdoor therapy.

In 2012, the Wounded War Heroes organization took Droddy out hunting to kill his first deer. He said he fell in love with the outdoors even more and wanted to help out.

He started taking other veterans kayak fishing or helping them train their service dogs.

“I’m programmed to want to give back,” Droddy said. “That’s just been the main goal of my life, to help veterans in the same spot I was to see that there’s an outcome at the end of the tunnel.”

Droddy said he also helps other veterans with their addictions, which has helped him overcome his own addiction and find peace within himself.

Droddy said until about two and a half years ago, he was in and out of mental health wards and attempted suicide. But when his daughter was born, everything changed.

“She took all the focus,” Droddy said. “I was no longer worried about my safety. I was trying to better myself so my daughter would have a better life.”

Droddy said his daughter even helps him with his PTSD, especially when it comes to being in and around crowds.

“She pushes me and makes me so much better and makes me work harder and strive,” Droddy said. “It’s an amazing change in my life.”

Another change is the house.

Crawford said the group has given away more than 850 homes since 2007. With each home awarded, the family also gets a three-year financial and family mentoring program, which means they get assigned a mentor to meet with them monthly to discuss how to be financially responsible.

Crawford said there are about 20 to 24 homes in the works. She said the foundation only caters to combat wounded veterans who have to apply to be considered for a house.

Droddy said he’s excited to be financially stable and responsible, and that it lifts a huge weight off of his shoulders.

“I’ve never had that opportunity to say to someone, ‘come to my home,'” Droddy said. “At the end of three years to know that we are financially stable and my daughter and our two sons will have a great life, that means so much to us.”

Droddy said down the line he’d like to start his own organization to help veterans, but he and his family have to make sure they’re taken care of first.

“I just like seeing the light in a veteran’s eyes when they realize there is hope at the end of the tunnel, or no matter what they’re going through or what they’ve done, it can be overcame,” Droddy said.