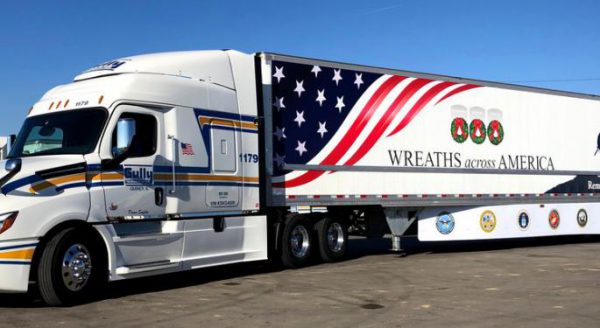 JD Walker’s son, Lance Cpl. Jeffrey Walker, was killed in Iraq over 11 years ago. In a few short weeks, Walker will deliver a truckload of remembrance wreaths to Arlington National Cemetery in honor of his son and other deceased veterans as part of the annual Wreaths Across America initiative.

Wreaths Across America organizes wreath-laying ceremonies at Arlington National Cemetery and over 1,400 other locations across the nation on the same day each year in an coordinated attempt to honor veterans stretching from the Revolutionary War to present-day conflicts. This day is called National Wreaths Across America Day, and 2018’s is planned for Dec. 15.

“We understand we have Veterans Day in the fall and Memorial Day in the spring, but our service members sacrifice their time and safety every single day of the year to preserve our freedoms,” the Wreaths Across America website reads. “In many homes, there is an empty seat for one who is serving or one who made the ultimate sacrifice for our country. There is no better time to express our appreciation than during the hustle and bustle of the holiday season.”

A veteran himself, Walker served in the U.S. Navy from 1978-80. He has been a truck driver for 32 years now, and he currently drives for Gully Transportation. This is his second year participating in Wreaths Across America as a Gully driver. Last year, Walker delivered wreaths to a veteran’s cemetery in Missouri.

“It is such an honor to watch the trucks going in and picking the wreaths up and being able to see how they’re made,” Walker said. “The people that get involved are so gracious. There’s a lot of grace involved in this and a lot of God in it, so to speak.”

When talking about what inspired him to become involved with Wreaths Across America, Walker talked about Jeffrey fondly, remembering his love of rollerblading and how they used to play pool together as if no time at all had passed.

He also remembered the day Jeffrey told him he joined the U.S. Marine Corps.

“He came home on a weekend and he said, ‘Dad, I want you to sit down. What I am about to tell you is going to blow your mind. I joined the Marine Corps,'” Walker recalled. “When he was in boot camp, he wrote me a few, ‘oh my goodness, what have I done?,’ type letters. When he got deployed, his letters that he wrote to me said he wished he was home and things like that. Just the typical father-son type letters.”

A couple of weeks before Mother’s Day 2007, Jeffrey called Walker and told him things were getting pretty bad in Iraq.

“At about 11:50 p.m. the day before Mother’s Day, he called his mom to wish her happy Mother’s Day, then 20 minutes later he was gone, hit by a sniper,” Walker said. “That was a shock to both me and his mother.”

Walker took the shock of losing his son and turned it into a mission to honor veterans across the nation.

“Just pulling up into the veterans’ cemetery gives me goosebumps,” he said. “It gives me chills every time I pull up into one because I’m doing something I believe in. I think it’s a very humbling experience, just being part of [Wreaths Across America.]”

Walker said being part of the Wreaths Across America ceremony at Arlington is on his bucket list. As he prepares to cross it off, he encouraged everyone to take the time to thank a veteran this holiday season.