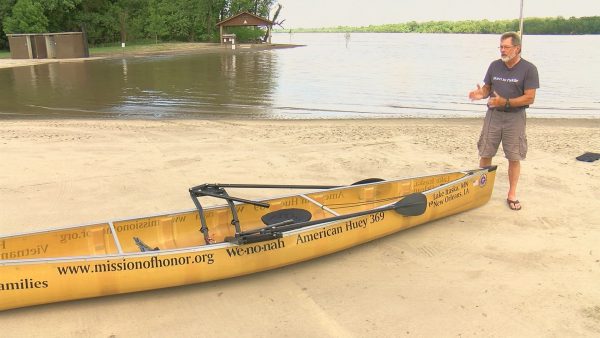 The Mississippi River is 2,320 miles long from where it starts at Lake Itasca, Minnesota, all the way to the Gulf of Mexico.

Jim Crigler stopped in Cape Girardeau, Missouri on Saturday night as part of his trek. Even though he now lives in Minnesota, Crigler is originally from Jackson, Missouri.

While in his canoe he will some days take on 60-70 miles of the mighty Mississippi in a day.

“It’s a long ride, it’s a long paddle,” said Crigler. “This is what I love to do, I love getting out on the water with this thing.”

A Gold Star family is a one who has lost a loved one in war. The non-profit American Huey 369, give Vietnam Gold Star families honor flights to D.C. to be able to see memorials.

“I really want to capture the attention of America,” he said.

If you take a look at his canoe you can see those reasons, are evident. A Gold Star sits in a purple background on the stern of his canoe.  A picture of a Huey is painted on the side and another emblem on the bow of his ship. They represent the non-profit.

“You know these families deserve recognition they deserve honor from our country, they deserve more honor than what we’ve given them.”

His passion for the cause goes back 45 years. Back to when he flew Huey’s in Vietnam. Back to his old roommate during the war, First Lieutenant Tomas Shaw. Shaw died in action during the war and Crigler was able to accompany his body back state side. A promise that they made years before.

“Tom and I had a pact between us that if one of us were killed in action the other one would be try and be the burial escort officer and comfort the family. That was the first time I met a Vietnam Gold Star family, but it wouldn’t be the last.”

Whenever he stops he meets with as many Gold Star families as he can, he thanks them for their families sacrifice and gives them the honor he said they deserve. He currently has met with more than 150 families.

“I’m going to continue my mission down to New Orleans and continue to raise awareness and raise money for my cause.”

For the next month or two, he will go back to Minnesota. The waters along the river are too dangerous for his 18-foot, one person canoe. Once they calm he will return to the area and finish his trek to New Orleans, meeting even more families along the way.

To find out more about Crigler and his cause you can find additional info on his website by clicking here.