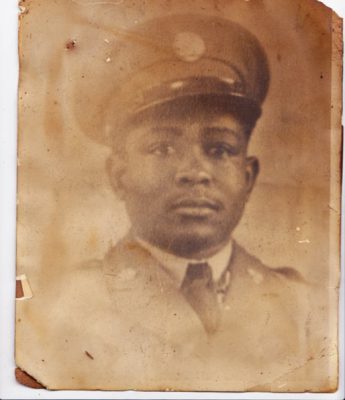 Tuskegee Airman and Army Corporal Samuel Sams, Jr., was laid to rest at the Louisiana Department of Veterans Affairs Southeast Louisiana Veterans Cemetery (SELVC) on Friday, July 28. According to SELVC Director Ted Krumm, this is a significant moment because Sams in the first Tuskegee Airmen to be buried here.

“It’s always an honor to inter any veteran or their spouse at our cemetery,” said SELVC Director Tedd Krumm. “But, it is not every day that you get the opportunity to brush with a little bit of WWII history and inter a Tuskegee Airman.   We are honored that his family chose the Southeast Louisiana Veterans Cemetery as his final resting place.”

Samuel Sams Jr. was born on May 25, 1921 in Oakdale, La. An original Tuskeegee Airmen, Sam fought in WWII in the 99th Fighter Squadron. He left behind his devoted wife of 40 years, Marian D. Sams, and his 11 remaining children of 14.

According to Tuskegee Airmen, Inc., “Tuskegee Airmen” refers to all who were involved in the so-called “Tuskegee Experience,” which was the Army Air Corps program that trained African-Americans to fly and maintain combat aircraft. The Tuskegee Airmen included pilots, navigators, bombardiers, maintenance and support staff, instructors, and all the personnel who kept the planes and pilots in the air.

The distinguished 333nd Fighter Group, which became known as the Tuskegee Airmen, was a product of the strict racial segregation required by the U.S. military at the time. Before 1940, African-Americans were barred from flying for the military.

The all African-American squadron went on to gain fame for its accomplishments in the war. In 2007, the Tuskegee Airmen were collectively awarded a Congressional Gold Medal that is currently on display at the Smithsonian Institute. The Tuskegee Airmen’s achievements helped pave the way for full integration of the U.S. military.

Sams was squadron clerk, working directly for Gen. Benjamin Davis Jr., commander of the Tuskegee Airmen, Marian Sams said. Sams was injured and missing in action for 11 days after an enemy attack.

Marian Sams said her husband and another airman were in a truck retrieving supplies for the squadron when they came under attack. The other airman was killed and Sams was injured and reported missing. He eventually made his way back to the squadron and was awarded a special lapel pin in 1945 as a result of his actions.

Sams, who attended St. Tammany High School in Slidell before joining the military, served on the deacon board for Goodwill Missionary Baptist Church and was one of the original members of the Fireside Gospel Singers.

According to the Sams family, “he was a devoted husband to Marian Sams, an attentive and hands on father, who loved and worshipped God through singing. He will truly be missed.”