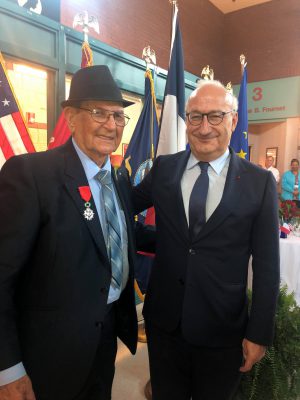 Jennings, Louisiana – The Louisiana Department of Veterans (LDVA) routinely highlights the incredible real-life stories of the men and women that we have the honor of caring for at our five world-class veterans homes. Every once in a while, foreign government’s also recognize the service and sacrifice of these local heroes.

Philippe Étienne, newly appointed ambassador of France to the United States, bestowed the National Order of the Legion to Boudreaux, who was surrounded by friends and family, at LDVA’s Jennings, La., home.

Étienne presented the National Order of the Legion of Honor to Boudreaux. This is the highest French meritorious military award, and was established in the 19th century by Napoléon Bonaparte. It is awarded for excellent military conduct, and delivered upon an official investigation.

“You are a man of courage,” said Étienne to Boudreaux in front of the large crowd that gathered during his presentation at the veterans home. “On behalf of the people of France, I offer you our eternal gratitude and our most sincere appreciation for your service.”

Lawrence Boudreaux was born March 10, 1922, in Church Point, Louisiana. He lived in that small farming town until he was drafted into the Army on Feb. 9, 1943.

He was only 20 years old at the time he was sent for training to Fort Sill, located in Comanche County, which is 90 miles southwest of Oklahoma City, for training.

Upon graduation, Boudreaux was assigned to the 101st Airborne Division (Air Assault). The 101st or “Screaming Eagles” as they are known, are an elite modular specialized light infantry division of the Army. These soldiers are trained for air assault operations, and are considered the most potent and tactically mobile division.

The now 21-year-old Boudreaux was then sent to Liverpool, England, with his brothers from the 101st. They were housed in a horse stable where they trained for war.

The Screaming Eagles specifically trained for the invasion of June 6, 1944 during that time. On June 8, Boudreaux and his division were on the beaches of Normandy.

Of the 15 soldiers that got off that boat with him, nine ended up getting sent back to England for medical treatment due to the injuries they sustained during the invasion.

When recalling that day, a very modest Boudreaux says all he ended up with was some shrapnel and a hurt leg. His service records, however, show that he was later awarded both a Purple Heart and a Bronze Star for the bravery he displayed on the battlefield.

To him, the six soldiers that were also hurt, although “not bad enough to be sent back,” are the true heroes. They are the ones that had to stay with their unit and press on while he was being treated for his injuries.

Boudreaux recovered and was sent back to his division for training prior to heading to Holland in September of 1944. He and his fellow brethren were sent to “protect the British from the Germans” during the Battle of Aachean.

According to Warfare History Network, in order to enter Germany, the U.S. Army would first need to capture the city of Aachen in one of the toughest urban battles of World War II.

The 101st spent 73 days on the frontlines. Those were “sad times,” says Boudreaux. “We saw a lot of bad stuff over there,” he says with a deep sadness in his eyes.

On Dec. 4, 1945, PFC Boudreaux was honorably discharged from the Army with only the clothes on his back, and memories that would last him a lifetime.

“In a way, I don’t feel deserving of this medal,” says the ever-humble Boudreaux of his newly pinned National Order of the Legion. “However, I am very proud to be receiving it. I just feel like the real heroes are the ones who did not come back home.”

“When I found out I was receiving this award, it did not seem real,” he says. “I told everyone I saw, called my family and friends. Later on I thought to myself, why do I get it and others here do not?”

“I wish all WWII veterans who were there that day could have lived to be as fortunate as I have been,” he says of his fallen comrades.

Boudreaux moved back home to Jefferson Davis Parish and worked his way up the Welsh Police Department ranks eventually serving as the Welsh Police Chief for five years. “I loved it,” he says his time on the police force.

The only thing Boudreaux loved more was his wife of 68 years, Loudia “Lulu” Broussard Boudreaux. They met at a dance in Mermentau, Louisiana.  They danced to the same tune until she passed away on Nov. 30, 2017.

Boudreaux says he was alone and looking for a new home after becoming a widower. He has been living at LDVA’s Southwest Louisiana Veterans Home for 17 months. “I love it here,” he says with a smile.

“Despite everything we went through during WWII,” says Boudreaux, “I would do it all over again for our country.”

Congratulations, Lawrence Boudreaux! We are proud of you, and are so happy to be able to play a small part in this next chapter of your life.