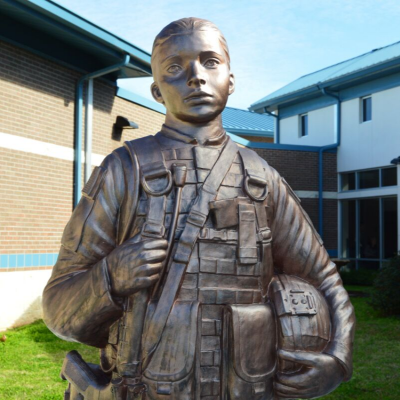 “This statue stands for all women veterans,” says U.S. Army veteran and SWLVH resident Gale Harden. “Living here at SWLVH, there are only two female veterans, so being able to see the statue makes me proud to be a woman veteran,” says the Vietnam-era veteran who worked as a nurse practitioners and now serves as the first female president of the home’s resident council. “A lot of times people look over us and don’t realize we (women) actually fought for our country too, not just the men. I can now look at that statue and reminisce on the lifelong friends that I made while serving in the Army.”

There are approximately 28,055 female veterans living in Louisiana and the LDVA is committed to addressing their needs, honoring their service, and to helping connect them with one another. The SWLVH female veteran statue dedication is one way to do that.

“This statue is a way for us to honor and recognize the impact women have had on and off the battlefield,” says SWLVH Administrator Matthew Duhon.

The event’s guest speaker, U.S. Air Force veteran and Louisiana Women Veterans president Anna Sanders, says she is proud to be part of an event that honors her fellow sisters-in-arms. “Women veterans should be recognized for their service and sacrifice in the same manner that our male counterparts are,” she says. “We proudly served our country, and continue to give back in various ways to our state and our communities.”

LDVA’s SWLVH would like to thank VFW #7321 Lady Auxiliaries from Lake Charles that donated the $5,000 to purchase the statue.

SVJ Creative Designs out of Kellogg, Minnesota was selected to design and supply the concrete female veteran statue that weighs around 900 pounds.

“Wow, I did it, I did that,” was SWLVH’s Assistant Director of Nurses and U.S. Air Force veteran Dori Gilder’s first impression when she first glanced at the impressive statue. “She brought back memories of my time in uniform, the amazing women I had the privilege of serving with, and the mentors who helped guide me along the way,” she says. “It made me proud to be a veteran, especially a female veteran!”

LDVA Secretary Joey Strickland has made women veterans a priority by assigning a full-time staff member to oversee the LDVA Women Veterans Outreach Program, U. S. Air Force veteran, Ms. Alex Juan, who can be reached at Alex.Juan@La.Gov.

Women veterans comprise 10% of the total veteran population in Louisiana and, many times, they are less likely to apply for benefits or reach out for help.

The LDVA wants to give Louisiana’s female veterans opportunities, like this dedication ceremony, to network, support, and build friendships with women who have shared similar experiences.

If you have further questions about the female veteran statue dedication ceremony, please call SWLVH Administrator Matt Duhon at (337) 824-2829.