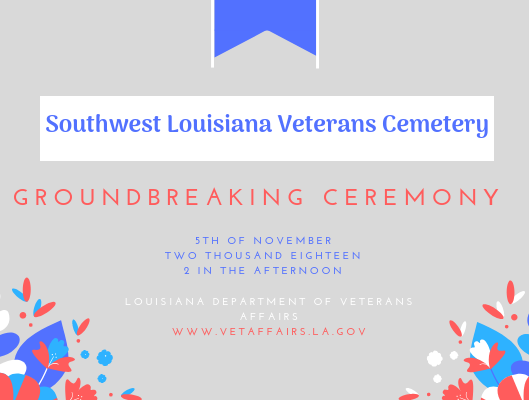 JENNINGS, La. — The construction of the Louisiana Department of Veterans Affairs (LDVA) fifth and final cemetery is breaking ground at 2 p.m. on Nov. 5.

Planning for the new cemetery began early in 2016. The 23.4-acre site is located near the LDVA’s Southwest Louisiana Veterans Home, 1620 Evangeline Road, in Jennings, Louisiana.

Last month, the Veterans Affairs National Cemetery Administration announced a $7.3 million federal grant approval for phase I of the new Southwest Louisiana Veterans Cemetery (SWLVC) which is initially being developed on 12.6 acres of land.

This new cemetery will serve all of southwest Louisiana from the Texas border to the Atchafalaya basin up to Leesville, 80 miles (129 kilometers) from Jennings.

“Everything is on schedule and we anticipate in our fiscal year 2020, probably early fall to late winter, we should be ready for burials here,” said LDVA Secretary Joey Strickland.

The SWLVC cemetery will be operated by the LDVA and will serve more than 36,000 veterans in the surrounding area. The parishes being served include: Allen, Calcasieu, Cameron, Evangeline, Jefferson Davis, St. Landry, and Vernon parishes.

Crews are building a road, flagpoles, entry features, administration building, maintenance facility, assembly area, committal shelter, memorial walk, landscaping, and supporting infrastructure to the cemetery that will be home to about 1,777 gravesites when finished.

Secretary Strickland said an opening date has not been determined, as finishing construction will depend on weather.

All members and Veterans of the armed forces are eligible to be buried in an LDVA state cemetery as long as they have met minimum active-duty service requirements and were honorably discharged.

Members of the reserve armed forces who die while on active duty, while on training duty or were eligible for retired pay, or were called to active duty and served the full term of service, may also be eligible for burial. Their spouse, widow or widower, minor children and, under some conditions, adult unmarried children with disabilities can be buried in the VA cemetery.

Strickland said eligible Veterans can be relocated to the new cemetery, but costs associated with relocation would be the responsibility of the family.