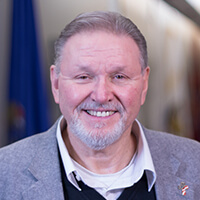 In 1967, Robbins, was a high school athlete and second degree black belt in Tae Kwon Do with dreams of playing in the NFL. One night, he made a bad decision that put his life on a completely different path. A judge offered him two options to get his life straight and he chose to join United States Air Force.

During his service, he traveled to Kwanju Air Base, South Korea, where he trained in martial arts. He used that skill set to help train pilots in martial arts as a Recreation and Fitness NCOIC. He also played football and baseball for the USAF while stationed in Okinawa, Japan.

In 1969, he married his high school sweetheart, Gale, and they now have 2 boys, Randy and Dr. Bradley Robbins. In 1971, he was honorably discharged from the military and went to John Curtis Junior College where he obtained an Associate’s Degree in General Studies. He began working for Delta Airlines in 1973, where he worked for 30 years. Prior to retiring from Delta, in 2002, he was ordained and licensed as a Minister and has been working with incarcerated veterans since that time.

“I do this for my brother Mike who was a Vietnam Veteran,” says Robbins of his continuous service. “He and I both have a passion for helping veterans.”

He retired from that position in 2014 and moved to Gonzales, La. before he started working for the Louisiana Department of Veterans Affairs as a Veterans Assistance Counselor.

“My favorite people are the ones that don’t know they even qualified for benefits and that we can help get the assistance and care that they deserve.”

In 2016, Billy became LDVA’s Cemetery Program Director and is now charged with the care and maintenance of our four veteran cemeteries in Louisiana.