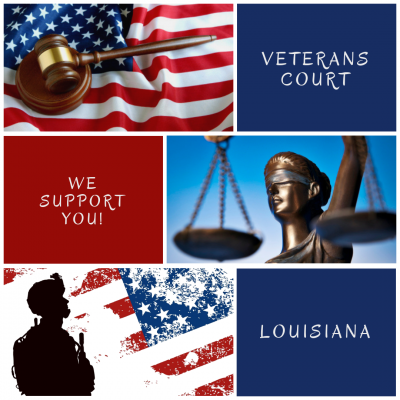 LAKE CHARLES, La. – “Sometimes life gives you a second chance, or even two! Not always, but sometimes. It’s what you do with those second chances that counts.”  The 14th Judicial District Veterans Treatment Court Program is committed to celebrating what Louisiana veterans do with the second chances they are given after graduating from their specialty court program.

On Dec. 13, in front of a crowd of friends, families, and supporters, three Veterans testified about how this program gave them a second chance at life during their Veterans Treatment Court Graduation at the Lake City Baptist Church.

The 14th Judicial Veterans Treatment Court is a joint endeavor between the judges of the 14th Judicial Court and Calcasieu Parish District Attorney John DeRosier. The Honorable David A. Ritchie and the Honorable Sharon Wilson are the presiding judges over Veterans Treatment Court and was founded by these two judges and Mr. DeRosier in January of 2016.

Judge Ritchie, who is a Louisiana Army National Guard Veteran, admits that the Veterans Court Program is a much more difficult program than a regular probation program. But, he wholeheartedly believes that it can also “completely turn someone’s life around.”

“I want you to know that we all fully support you and your efforts to get back on track,” said Judge Ritchie as he addressed the graduates. “We always want what’s best for you.”

It was clear from the personal stories that were shared that these veterans, presiding judges, mentors, team members, and families truly appreciated the opportunities given to them and are all committed to supporting others that are still struggling.

U.S. Marines Veteran Tyler Frey was the first graduate to address the crowd. He soon had everyone in tears with his brutal honesty and genuine appreciation for his case manager.

“I’ve never had a hard time finding trouble; I’m actually really good at finding it,” said Frey admitting he’d lost sight of what was important to him prior to committing to the program.

He called 14th Judicial Veterans Treatment Court Case Manager Dominique Mau his “MVP” and said her genuine concern for his well-being made a huge impact on him. “Dominique, if you’ve ever wondered if you’re making a difference, just look at me,” he said.

The purpose of the special court is to help veterans in the criminal justice system, obtain the needed resources to once again lead productive lives. The court offers rehabilitation, employment, housing, food and other needs, while helping them resolve their criminal charges. Veterans are placed with a “battle buddy,” who is a veteran from within the community. They act as an accountability partner for each individual throughout the program.

The Veterans Treatment Court team also includes The Calcasieu Parish Sheriff’s Office, The Public Defender’s Office, Veteran mentors, the Veterans Service Office and the Veteran Justice Outreach. The team went through on-site training in Tulsa, Oklahoma, which has one of the largest and oldest Veterans Courts in the country.

There are stipulations on what kinds of offenders are eligible for Veterans Treatment Court. Cases involving sexual crimes and/or homicide are not candidates for the program.

The Veterans that choose to participate in the program come out with more tools to help them cope, a stronger support system, and a second chance to get it right.

U.S. Army Veteran Denis McNight said he was a “lost soul with no direction or guidance” after he completed his 10 years of service. “This program helped me find my feet again and I am so thankful to all of you for this opportunity,” said McKnight who was once practically homeless and is now a full-time student with gainful employment he enjoys.

Not all veterans graduate from this specialty court program due to sanctions or re-offenses. “Not everyone makes it and it breaks my heart when they don’t,” said Judge Ritchie. “But, I have to focus on the ones that need the help.”

“This isn’t an ending,” said Judge Ritchie at the conclusion o the ceremony. “It’s your new beginning.”