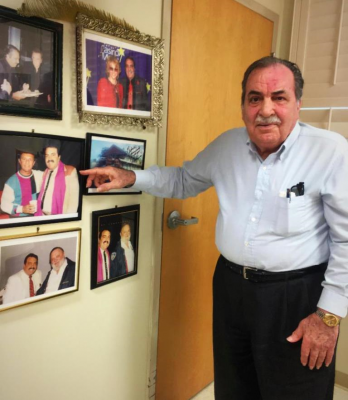 RESERVE, La. – “When things go wrong, don’t go with them.” That famous Elvis Presley quote has inspired millions and been a bonfire for of one of his biggest fans, U.S. Army Veteran Gabriele Puccio.

Puccio was born in Sicily which is the largest island in the Mediterranean Sea. It is an autonomous region of Italy, located in Southern Italy along with surrounding minor islands, officially referred to as Regione Siciliana.

In 1957, he moved to the United States with his family. His love of music started at an early age. “I’ve always had a love of music,” says the man who is also fluent in Italian.

After serving his new country with both honor and distinction, he left the Army and pursued his culinary dreams by attending Delgado Community College’s Culinary Arts School.

His passion for music remained at the forefront though. In a 2015 interview with The Advocate, Puccio said, “I grew up in the French Quarter, and I’d sit in front of the radio and listen to Fats Domino, Elvis Presley, Ernie K-Doe. My whole life seemed to begin and end at that time. It was everything I was comfortable with and came to love.”

His list of famous friends is long and impressive, and includes the likes of: Ann Margaret, Johnny Cash, Burt Reynolds, Frankie Avalon, Kevin Costner, and many more.

Before Hurricane Katrina, Puccio had an Elvis Museum at his home in Chalmette, Louisiana. Unfortunately, when Katrina brought 20 feet of water into his home, he lost all of the mementos he’s spent a lifetime gathering.

Never one to give up on any of his dreams, Puccio, like many Louisianians, rebuilt. He now shares his love of music with everyone he encounters. One of his favorite things to do, he says, is sit in the common area at the Louisiana Department of Veterans Affairs Southeast Louisiana Veterans Home and listen to the jukebox play old records.

Puccio likes to share tidbits of his days spent hobnobbing with celebrities, his passion for food, and his love of all things 1950’s, to his new friends and fellow Veterans at the Reserve, La. Home. He’s been at the home for 3 months now and says, “It’s going really well here,” as he taps his feet to the beat of his own music.