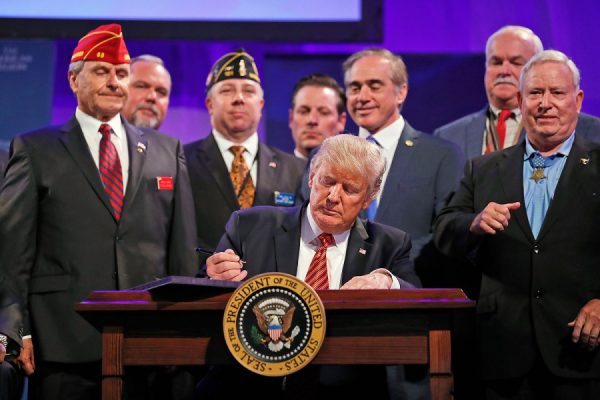 Trump signed the Veterans Appeals Improvement and Modernization bill on stage at the 99th American Legion National Convention in Reno, Nev. The Legion was one of the groups that supported the overhaul.

During a speech before the signing, Trump touted the legislation as “historic.”

“Veterans will receive timely updates, and they will get decisions much more quickly in a fraction of the time,” Trump said.

The bill creates three paths for veterans to appeal their claims:

VA officials have said it would take them 18 months to establish the new system.

The bill also forces the VA be more transparent with veterans about the status of their appeals. Some veterans have criticized the VA for going years without giving them an update.

VA Secretary David Shulkin listed appeals reform as one of his top priorities. At his confirmation hearing in February, he called the current system “broken.” In previous years, former VA Secretary Bob McDonald lobbied for the reform, but it never gained traction in Congress.

The legislation does not address the backlog of appeals.

As the VA attempts to work through pending and backlogged claims more quickly, the number of appeals is expected to increase. About 12 percent of benefits decisions are appealed, according to the VA.

The VA now has nearly 340,000 pending claims for benefits, and 83,000 backlogged, meaning veterans have been waiting for decisions for longer than 125 days.

Shulkin teased Wednesday that he would announce details of a new program next month called “decision-ready claims,” which comes with the promise of deciding claims within 30 days of filing.