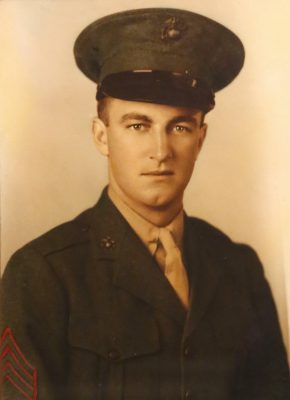 CONCORD, N.H. — For nearly six decades, a Marine Corps sergeant’s family lived under the misconception that his body was lost at sea during World War II.

Killed in what has been called the bloody Battle of Tarawa, David Quinn’s remains have been identified and are on their way home to New Hampshire.

Funeral services with full military honors will be held for the 24-year-old on May 5 at the Congregational Church of Temple.

Quinn died on Nov. 20, 1943, the first day of the three-day Battle of Tarawa, as Marines landed against strong Japanese resistance on the tiny, coral reef-ringed island of Betio in the Tarawa Atoll of the Gilbert Islands. Approximately 1,000 Marines and sailors were killed and more than 2,000 were wounded.

His parents and siblings all died before the family discovered a letter to his widow from a Marine veteran disproving the claim that his body was lost at sea. In the early 2000s, they were contacted by military scientists that said DNA was available to identify Quinn.

It would be about a decade, in 2012, until a DNA kit was sent to two of his nieces to match the mitochondrial DNA that was collected from the remains. Five years later, in November of last year, they received notice that the remains were accounted for.

“It’s a shame that family who knew him never got that closure, but it’s an amazing feeling knowing that this long journey is finally coming to an end,” said Paul Quinn, his nephew, who found the letter during his research and spearheaded the efforts to identify his uncle’s remains.

Paul Quinn said that his uncle died six years before he was born, and there were few stories passed along to the younger generation about him. But his immediate family remembered him fondly and were filled with regret that they never knew what happened to him. He married his widow, who he met in New Zealand, four months before he left for Tarawa.

“When I first got in touch with her, she told me that they had more joy in those four months than most people find in a lifetime,” Quinn said.

Paul Quinn said he often doubted his uncle would be identified, especially after years of accepting the story that he was lost at sea. The Pentagon’s POW/MIA Accounting Agency says Quinn’s remains will be transferred at Logan Airport in Boston on May 4.

There are currently 72,934 service members from World War II still unaccounted for. More than 400,000 died during the war.