Real people, events inspire military storylines in NBC show ‘This Is Us’ 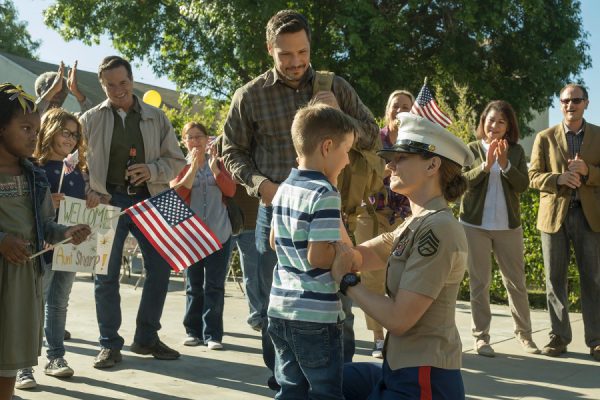 WASHINGTON — The fourth season of the Emmy-winning TV show “This Is Us” has introduced a female Marine, who viewers first see in Afghanistan on a video call with her husband. The tearful call abruptly ends when a superior officer yells out her last name — “Sharp!”

The character’s name, Cassidy Sharp, is an homage to a real-world Marine: Lance Cpl. Charles “Seth” Sharp, who was killed in Afghanistan on July 2, 2009, as his unit pushed into the Taliban-controlled Helmand province. He was 20 and the first Marine killed in the offensive.

Ric Sharp, Seth’s father, watched the season premiere of the NBC drama last month, along with 7.7 million other viewers.

“It gave me cold chills,” Sharp said in an interview with Stars and Stripes. “I teared up. I’m tearing up right now.”

Cassidy Sharp is an amalgam of real people — her name, gender and experiences all inspired by servicemembers, some killed in action like Shannon Kent and others still alive. The direction for another character this season, Vietnam War veteran Nicky Pearson, was also crafted from real-world stories.

The focus on real people and true events in the show’s military-centric storylines is largely due to James LaPorta, a Marine Corps veteran and Newsweek reporter who was hired by NBC as a technical consultant for “This Is Us.” Using the stories of servicemembers and veterans he knew or wrote about, as well as his own experiences, LaPorta helped the writers shape season four.

“Hollywood seems to be optimistic in terms of wanting to get it right,” LaPorta said. “But it did seem, for a long time, there were only caricatures of veterans. They were either incredibly heroic or incredibly broken. Everything in the first episode and in following episodes, I can tie to either my own experiences, someone else’s or a fact or statistic.”

New episodes air Tuesdays on NBC and Wednesdays on the Armed Forces Network.

“This Is Us” follows the lives of three siblings — Kevin, Kate and Randall — and their parents, Jack and Rebecca Pearson. It’s primarily based in the present, with flashbacks and flash-forwards.

LaPorta, 32, was a fan of the show from its launch in 2016. There was a moment in season two that particularly struck him: when the show’s protagonist, Vietnam War veteran Jack Pearson, gave some advice to his son, Randall, near the Vietnam Veterans Memorial in Washington.

“Jack says he came home from war and was off-balance for a long time. He tells Randall, ‘You’re going to find balance again, lose it and find it again,’ ” LaPorta said. “And that … I needed to hear that right at that moment.

“I know it’s fictional, it’s just a story. I get all that. But in that show, everything is taken from a real-life thing.”

In season three, writers introduced a plot involving the Vietnam War. LaPorta took notice of its historical accuracy and discovered NBC had hired Tim O’Brien as a consultant. O’Brien, a novelist, wrote “The Things They Carried,” a collection of stories inspired by his own experiences in the Vietnam War.

LaPorta, who reports on national security and the Department of Defense for Newsweek, wrote a story about O’Brien’s involvement in the show. Following their interview, “This Is Us” creator Dan Fogelman extended an open invitation for LaPorta to visit the set.

Months later, while reporting in California, LaPorta stopped by. At that point, writers were planning for the fourth season. They were pondering another military storyline, acknowledging the popularity of their focus on the Vietnam War.

LaPorta, who was an infantryman in Afghanistan, was brought into the writer’s room. What was supposed to be a 15-minute conversation about his military service turned into two hours.

“There were tissues all over the place; it was really a long therapy session,” LaPorta said. “I laid out part of my story, and out of that was born Cassidy.”

Season four of “This Is Us” premiered Sept. 24, and the fourth episode airs this week. What viewers have seen from Cassidy Sharp (played by Jennifer Morrison) and Nicky Pearson (Griffin Dunne) has been rooted in reality.

In the first episode, Cassidy, back in the U.S. and struggling with post-traumatic stress disorder, experiences a flashback and strikes her young son. LaPorta has a similar story, though he didn’t hit anyone.

A few years ago, his son, about 3 at the time, was jumping up and down to a song — “Ho Hey” by the Lumineers — and LaPorta was transported back to Afghanistan, where he watched a 5-year-old Afghan boy jump on an IED.

In episode three, Nicky’s experience at a vet center also contained similarities to LaPorta’s history. In the opening montage to the episode, viewers see Nicky form a bond with his counselor and make strides with his sobriety — just to see it fall apart when his counselor is transferred to another facility.

LaPorta sought therapy when he returned from a 2009 deployment to Afghanistan. He built a rapport with a counselor at Parris Island in South Carolina and was “devastated” when the doctor accepted a job elsewhere.

LaPorta described watching that montage as a “gut punch,” like he was watching himself.

“I felt like I was being abandoned and starting at square one with my own issues,” LaPorta said. “I didn’t want to have to tell my story again. I quit therapy for a long time. That’s what happens with Nicky — that frustration.”

The details are real, too.

One of the show writers noticed LaPorta nervously tap his chair, and they wrote that in as an aspect of Nicky’s character. Cassidy’s unit is LaPorta’s — Echo Company, 2nd Battalion, 8th Marine Regiment.

And there are the small things that make the show accurate to real life, such as military-approved hairstyles, a correctly placed insignia, Afghan men with dyed beards and an allusion to Veteran Treatment Court.

“Since the first episode, I’ve been inundated with messages and emails from fellow Marines and Gold Star families,” said LaPorta, who lives in Delray Beach, Fla. “Servicemembers and veterans are really appreciative of just getting it right.”

Though Cassidy’s arc is inspired by LaPorta’s story, and her name is Seth Sharp’s, writers decided to make the character a female Marine. About the time the season was being written, Shannon Kent was in the news.

Navy Chief Petty Officer Shannon Mary Kent, part of a small, secretive cryptologic intelligence community, was killed Jan. 16 by a suicide bomber at a restaurant in the Syrian city of Manbij. The 35-year-old mother of two was the first female U.S. servicemember killed in Syria since the U.S.-led coalition’s campaign against Islamic State began there in late 2014.

LaPorta wrote about Kent for Newsweek and took notice of the public’s surprise at a woman participating in a high-level, classified mission.

“It seemed like, to the average American reader, it was sort of shocking. And that stood out to me as a problem,” LaPorta said. “That means there’s an under-representation of women and women serving in war.”

Kent was part of the inspiration for Cassidy Sharp, as were two female Marines that LaPorta served alongside. Both served as human intelligence collectors, which was Cassidy Sharp’s job.

Viewers watch in the first episode as Sharp pushes an Afghan woman for intelligence on a terrorist. During the scene, Sharp calls to another servicemember, “Lasher.” That name is an homage too.

Lance Cpl. Jeremy Lasher, who served with LaPorta and Seth Sharp, was killed July 23, 2009, in Garmsir, Afghanistan. He was 27. Before the new season aired, LaPorta called the families of people to whom “This Is Us” paid tribute. Seth Sharp’s father encouraged everyone he knew to watch.

“I wanted everyone that I knew to watch it — family, friends, people in the area,” Ric Sharp said. “I was proud and just excited to know that his name is being remembered. I’m a firm believer that when you say their names, they’re not forgotten.”

LaPorta wanted to warn Sharp’s family of one moment in the show when Cassidy Sharp returns to the U.S. and exits a cab to be greeted by her friends and family. In the background, a neighbor holds a hand-written sign that reads, “Welcome back Sharp.”

“It dawned on me that, ‘Oh, Sharp never got that,’ ” LaPorta said. “That’s something his family didn’t get to experience.”