Paw patrol: A Brock from the norm 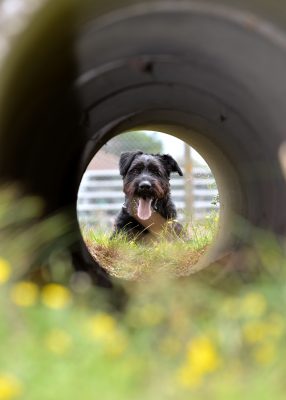 RAF MILDENHALL, Suffolk — On a recent assignment to Germany, Military Working Dog Brock was part of the security detail for the president of the United States’ visit to the G20 Summit in Hamburg, where he worked hand-in-hand – or rather, paw-in-paw – with the Secret Service dog teams.

Back here at his home station, the K-9 certainly stands out from the crowd of German Shepherds and Belgian Malinois working dogs – 4-year-old Brock is a 98-pound black Giant Schnauzer, and causes people to do a double-take wherever he goes.

Giant Schnauzers were used by the Air Force as military working dogs in World War II, but weren’t used again until the early 1980s. While they were found unsuitable for military duty in the past, the Air Force decided to try one more time.

“Although it’s an unwritten rule, I think it’s because the dog is the asset and although we’re a team, the dog does the majority of the work, therefore he or she is the real boss,” Webster said.

“The dogs are taught like brand new Airmen – they learn and are taught basic odor detection and room searching, all the way down to bite, holding and obedience – it’s not an easy task to teach a dog these crucial tasks, and many dogs don’t make the cut to being a military working dog.”

Brock is the first and only Giant Schnauzer in the Department of Defense in almost 30 years. Young said his K-9 teammate passed his behavioral tests with flying colors, so those in charge of choosing service dogs for the DoD decided to go ahead and purchase him.

All Department of Defense military working dogs are trained at the 341st Training Squadron, Joint-Base San Antonio-Lackland, Texas, and while there, Brock gained the reputation of being the hardest dog to train. Although originally earmarked for the Transportation Security Administration, they couldn’t take him because he bites. While unsuitable for them as they only use sniffer dogs, Brock was a good fit for the Air Force because of the requirements needed for patrol-training dogs.

Young admitted that when he first became Brock’s handler, the dog was very strong-willed and wouldn’t react to his commands. After talking with the K-9 trainers in Texas and following their advice, Young and Brock soon became a strong team and a force to be reckoned with, though it took a lot of hard work and patience.

“Things that worked for the other dogs wouldn’t work for Brock – he does things a lot differently. He’s great now, but I spent a lot of my off days working with him to gain his respect, and received a lot of help from the kennelmaster and other handlers,” Young said. “When I first got him, he was really dependent on his handler so if he missed anything during training, it would be on me. I would try to give him the independence to find the odor on his own, but he didn’t know, so I had to steer him into it. He has a lot of personality and is goofy, playful and very loyal. He’s also much easier to work with now. We’ve been together for a while and have a bond that I don’t have with any other dog here,” he said.

Webster explained that depending on how well the dog and handler mesh, it takes anywhere from 45 to 90 days to get a team fully certified.

“As the kennelmaster, I need to know how all my teams work and what their strongest and weakest points are so we can build them to make them solid,” he said. “Once I feel the team is capable to work the road and detect substances, I’ll initiate a validation test, and after the team passes that phase, we then do their certifications.” Webster added that during his time as the trainer and kennel master, Brock has been relatively easy to train.

“A large part of that is because Sergeant Young has been his handler for two years and they’ve built the bond which all handlers hope to build with their dog. When we first received Brock, we initially noticed how uncoordinated he was – it was definitely a humorous sight to see a massive puppy of his size doing the work we are required to do! Brock was like a bull in a china shop – now he’s one of our best noses and MWDs,” Webster recalled.

He explained how the issue is a common one when a new handler is assigned to a dog.

“They’re just like humans and they want to feel you out and really test your patience and abilities,” he said. “A lot of the rapport to become a good team is built upon trust, and the handler is responsible for that. They play a lot of fetch, as well as go on walks and spend time just playing with them as a dog. We ask a lot from these dogs, so we need to take a step back sometimes and let them be a dog. Rapport comes with detection because it’s ultimately a game – if you can have fun with your dog at the same time, it builds a better bond.”

The giant dog and his handler work so well together they were given the opportunity of working the presidential detail in Germany.

“Brock was great out there, but the environment affected him at first – he didn’t want to eat and you could tell he didn’t know where he was,” the handler said. “After a couple of days he got used to it and was back to his normal self again.