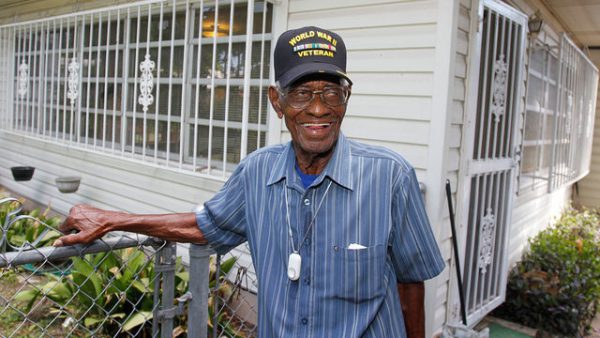 AUSTIN, Texas – “I feel that I made a record. It’s a record that nobody had made yet,” said Richard Overton, the oldest World War II veteran, of his age.

The 112-year-old veteran passed away Thursday, just days after recovering from pneumonia.

Overton was born on May 11, 1906, in Bastrop County, just a few years before the Titanic sank and nearly a decade before World War 1.

In 1942, he enlisted in the U.S. Army near San Antonio at Fort Sam Houston and served in the South Pacific during World War II in Hawaii, Guam, Iwo Jima and Okinawa.

“It’s one of those things you’re lucky to get out of, ’cause it’s a lot of war, a lot of troops got killed,” Overton said.

Overton retired from the military in Oct. 1945 with the rank of corporal before settling down in Austin when the population was just 100,000.

He lived in the same house he built after the war for many decades.

“All these big buildings, these highways, these trees,” said Overton. “I seen all of this Austin go up.”
Despite his age, he continued driving, smoking cigars and drinking whiskey, and according to Overton, his secret for longevity was the cigars.

“I started smoking cigars when I was 18 years old. I’m still smoking cigars, but I don’t inhale the smoke. That’s the reason my heart and everything is so perfect.”

Overton also said he never gave up his faith.

Overton won the hearts of many, including President Barack Obama, Greg Abbott and other politicians
In 2013, Obama invited Overton to spend Veterans Day at Arlington National Cemetery, where he was greeted with two standing ovations.

Reactions are pouring in from across the state.

“One of my favorite moments at the Governor’s Mansion was celebrating the 110th birthday of Richard Overton—the oldest WWII Veteran,” read a tweet posted by Abbott along with a photo. “Today we mourn the loss of this legendary American hero. May he Rest in Peace”

Attorney General Ken Paxton shared a tweet saying, “Richard Overton, America’s oldest WWII veteran, has passed away. A Texan and local hero to many, he will be missed.”

Lieutenant Governor of Texas Dan Patrick said, “Jan and I are sad to hear that we have lost Richard Overton, a great Texan and an American patriot who inspired so many.  He was the oldest man in America and the oldest living WWII veteran.  I was honored to know him.  He visited the Texas Senate in 2015.