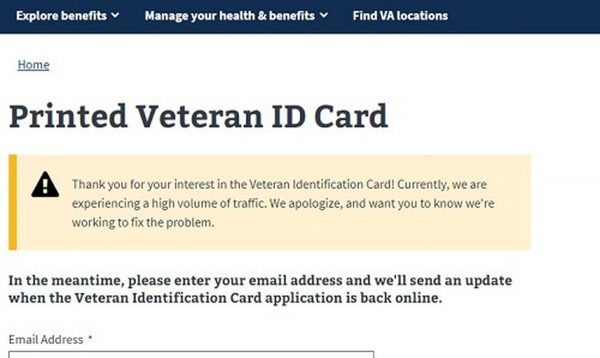 WASHINGTON — After already waiting two years for promised new ID cards, veterans will have to wait a little longer.

Less than a week after Veterans Affairs’ official rollout of new identification cards, the department’s online application process is down, with few details on when the system will be working again.

Would-be applicants who visit the VA website are greeted with a message blaming the problem on “a high volume of traffic” and a form promising to notify them when the system is fixed.

VA spokesman Curt Cashour said in a statement that department officials are aware that “some veterans have experienced issues with the application process, but leaders of VA’s Office of Information and Technology are actively engaged in fixing them.”

He also said that “many veterans have successfully registered for the card since the program was announced” but declined to provide any application numbers.

The cards — designed to be an easy way for veterans to prove their military service for a host of non-government services — are scheduled to be delivered within 60 days of applying, with digital copies available for print-outs in advance of the mailed copies.

The cards were mandated by Congress in July 2015, with the expectation of distribution sometime in 2017. Current VA officials have labeled their recent roll out “fulfilling a promise that has been unfulfilled since 2015.”

Final design of the cards has still not been made public. Earlier versions of the card had the Office Depot logo on the back, with veterans’ information on the front.

Under rules developed by VA, individuals who served in the armed forces, including the reserve components, and have a character of discharge of honorable or general under honorable conditions are eligible for the new IDs. Veterans with other than honorable status are not eligible.

That move has upset some veterans groups, who noted the legislation creating the cards included no such restrictions. They worry the exclusion of other-than-honorable veterans could further marginalize that population.

The new cards won’t replace VA medical cards or official defense retiree cards, and will not carry any force of law behind them. Once the system is operational again, veterans will need to register for an online account with VA to apply for the card.

Rep. Vern Buchanan, R-Fla. and the sponsor of the legislation which created the cards, said in a statement last week he hoped the new IDs “will make life a little bit easier for our veterans and serve as a constant reminder that our brave men and women in uniform deserve all the care and respect a grateful nation can offer.”