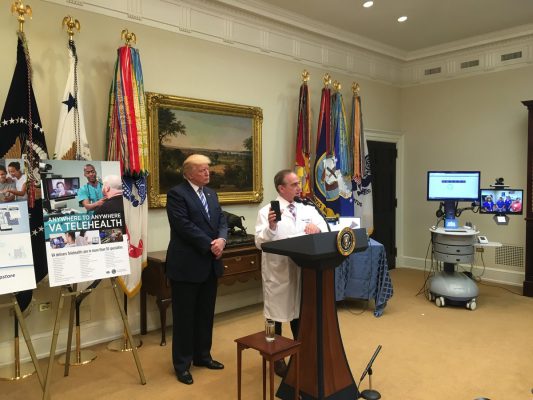 WASHINGTON — Veterans will be able to schedule medical appointments online and consult with physicians on their mobile phones through an array of new telehealth offerings unveiled by the White House and Department of Veterans Affairs on Thursday.

The move is part of broader VA reforms promised by President Donald Trump and should expand access to department medical care for tens of thousands of rural and homebound veterans across the country. In some cases, federal money will pay for upgraded mobile phones and tablets to help veterans use the new medical technologies.

VA already is one of the largest telehealth systems in the world, with more than 700,000 remote appointments in 2016 alone. Shulkin, a physician who still sees patients through the telehealth system from VA headquarters in Washington, D.C., said he expects the new offerings to push that figure over 1 million this year, and even higher in years to come.

Department video services for remote medical appointments are already available for about 300 VA providers and nearly 70 VA clinics. Shulkin said that number will grow steadily in months to come, as new equipment and training is rolled out.

Training will be available for patients too. To accommodate older, less tech savvy veterans, the department will provide online classes on how to use the telehealth services and new equipment, if physicians decide it’s a medical necessity.

VA officials demonstrated the new services in a White House event on Thursday. President Donald Trump spoke to a veteran patient in Oregon through the new VA Video Connect system, and watched as doctors there consulted with both Shulkin and another specialist over the online connection.

“We’ve giving our veterans the very best,” Trump said. “This will significantly expand access to care, including the area of mental health … and suicide prevention.”

The new online and mobile appointment scheduling tool — Veteran Appointment Request — is expected to provide faster medical access and more information on wait times to veterans seeking care. The latter issue has been a problem for VA since 2014, when a wait-times scandal forced the resignation of then VA Secretary Eric Shinseki.

With the new tool, which is available through www.va.gov and the department’s mobile app stores, veterans should be able to view upcoming appointment openings in their area and plan meetings around their own schedule.

But Shulkin said the tool won’t allow veterans to look at medical care options outside the VA. Private-sector appointments can be paid for at VA’s expense, but veterans will still need to go through existing department programs to access that alternative.

Still, Shulkin said he expects the new tool will “be part of the solution in improving wait times and access” by giving veterans more power over choosing appointment times.

The announcements were made in conjunction with the new White House Office of American Innovation. Administration officials had billed the new initiative as a way to work technology and innovation into federal bureaucracy, and had promised close coordination with the new office and VA.