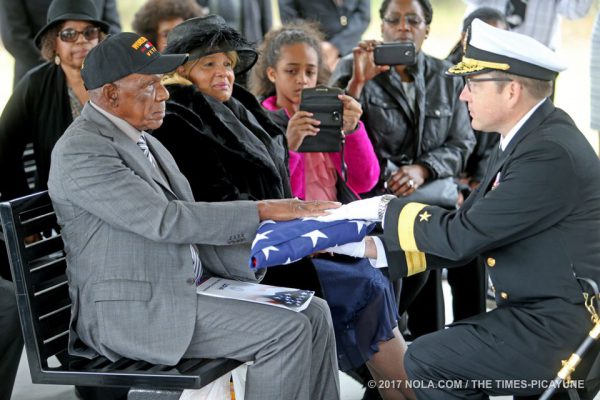 The six Navy sailors placed the casket, draped in an American flag, into the waiting hearse. Swirling lights of the nearby Jefferson Parish Sheriff’s Office escort vehicles turned the sailors’ enlisted whites blue Tuesday night (Nov. 7). They backed up slowly as they transferred the weight, still in formation, their eyes glued to the casket.

The last sailor, of the Naval Air Station Joint Reserve Base New Orleans honor guard, came to a standstill. A call was issued and, as each one raised their hand in a salute, Freddie Dusset and Glen Dusset joined. Each hand moved silently in sync, from the sharp initial movement to the slow, fading release.

For the first time since he was killed aboard the USS Oklahoma during the bombing of Pearl Harbor nearly 76 years ago, Steward’s Mate 1st Class Cyril Isaac Dusset was home.

New Orleanians Albertha Cook and Leon Dusset welcomed their second son, Cyril Isaac, on Aug. 15, 1920. It was a fraught time, especially for African-Americans living in the Deep South who, like the Dusset family, faced segregation and Jim Crow laws.

Cyril was part of a large family — he had eight siblings — and the Dussets saw military service as a way to better their lives and find opportunities. Ask one of the Dussets now and they’ll start tapping their fingers as they count, mentally climbing the limbs of their extensive family tree.

Times have changed some, but the Dussets still serve. When the family heard that their Uncle Cyril’s remains had finally been identified, they saw his return home as an opportunity. I received an email like nearly every other media outlet in New Orleans because the Dussets want you to know about Cyril. They want you to know that he lived, he served and he died for this country. But they also want you to know that black service-members in Cyril’s day had a steeper hill to climb, even when he was willing to die, and did so, as a result of that service.

“There wasn’t much black men could achieve,” said Freddie Dusset, the oldest son of Cyril’s older brother and the oldest surviving member of the family. “A black man during that time couldn’t go nowhere, couldn’t do nothing.”

It’s hard to pin down many personal details about Cyril’s childhood: Freddie and Glen don’t remember much being said about him, beyond that he was a sailor who died at Pearl Harbor. They do remember seeing Cyril’s picture hanging in their grandparents’ living room, a lightly colored formal portrait of the young man standing in his sailor’s uniform, surrounded by a caramel wood frame.

Cyril went to school at Valena C. Jones Elementary in the 7th Ward. It was the city’s first public black elementary school, and from there he attended Albert Wicker Junior High. Cyril enlisted with the United States Navy on Oct. 12, 1939, at the age of 19, trading a segregated civilian life for a still-segregated one in the military. He signed his name to the papers with a loose, looping pen that would run out of ink every few lines. His physical listed him as 5-foot-5 inches and 135 pounds. His eyes, hair, complexion and color all the same: “Negro.”

Within a few months, on March 29, 1940, Cyril reported for duty aboard the USS Oklahoma, the same battleship his older brother, Winifred “Freddie” Dusset, served on.

The Oklahoma soon traveled as part of the United States Pacific Fleet to conduct exercises off the Hawaiian coast in May 1940, where it stayed until Dec. 7, 1941, when Japan’s surprise attack dragged the United States into World War II. The first torpedo hit the Oklahoma just before 8 a.m., but others followed, and the ship quickly capsized.

Cyril was supposed to be at home in New Orleans that day, standing in his brother Freddie Dusset’s wedding as best man. Instead, Cyril was among 429 sailors and Marines who died aboard the Oklahoma.

Cyril’s rank at the time he died — steward’s mate first 1st class — was one reserved for non-white servicemen whose jobs it was to feed and serve officers.

Rescuers worked over the next days, weeks, months and years to recover the bodies of all who had died. The limitations of science back then made it impossible to identify everyone; only 35 people were positively named. The rest were buried in Hawaii as “Unknowns.”

Back home in New Orleans, just a few weeks after the bombing of Pearl Harbor, Leon Dusset received a telegram.

“The Navy Department deeply regrets to inform you that your son, Cyril Isaac Dusset, Mess Attendant First Class, U.S. Navy, is missing following action in the performance of his duty and in the service of his country,” it read. The entire message was impersonal, a form letter on which Leon’s son’s name had been input on a typewriter.

It took a few weeks for Leon to respond, but by Jan. 12, 1942, he needed more information about his son.

“Would appreciate very much any new news as to whether he has been found,” he wrote, “as we are very much worried.”

It took another month for the formal notice of death to arrive, type-written.

“It is hoped that you may find comfort in the thought that he made the supreme sacrifice upholding the highest traditions of the Navy, in defense of his country,” reads the letter dated Feb. 16, 1942.

Decades later, in 2015, the remains of military men who had died at Pearl Harbor began being exhumed on the hopes that advanced technology made it possible to identify them and send them home.

Cyril Dusset was there all along, wrapped in a military blanket inside Grave P999, buried alongside eight of his fellow servicemen.

In dozens of pages of documents provided to the Dusset family, you can read Cyril’s DNA sequence and see pictures of his jawbone, his teeth, his skull. The positive identification is straight science — but for the Dussets — this was family.

It took the Department of Defense about five years to certify the positive identification and send Cyril’s remains to Louisiana. Freddie Dusset chose to bury his uncle at the Southeast Louisiana Veterans Cemetery, in Slidell.

“It was the closest I could get him to coming home,” Freddie said.

Cyril’s remains arrived Tuesday. His funeral was Thursday afternoon. His flag-draped casket rested at the head of a small gathering of two dozen friends and family in the cemetery. The jarring 21 shots of a 3-volley rifle salute rang out overhead before a sailor played “Taps.” The flag was folded, passed from hand to hand of the honor guard, to eventually land with Freddie, the spent shells of the salute tucked inside its folds.

The ceremony, according to one of Cyril’s great-nephews, Mitchell Dusset, was bittersweet.

“Bitter,” he said, “because when Cyril died, his parents and all his siblings were alive. They didn’t have the opportunity to see him come home. But it’s sweet, because all his nieces and nephews can see it.”

Glen, one of Cyril’s nephews, offered a few words of his own, recalling that moment at the New Orleans airport Tuesday when he and Freddie raised their hands in salute and watched their uncle come home. He called it a “revelation.”

“It was a feeling of relief,” he said. “I know my dad and his siblings and grandmother are proud of us. … He is my American hero.”

At the ceremony’s end, as white doves were released to fly over the cemetery, there were smiles all around. The Dussets walked away feeling — finally — closure.

Chelsea Brasted is a metro columnist covering the New Orleans area. Send story ideas, tips, complaints and fan mail to cbrasted@nola.com. You can also text or call 225.460.1350, and follow her on Twitter and Facebook.