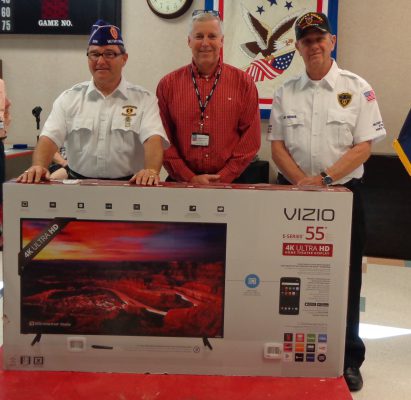 LDVA Secretary Joey Strickland addressed the crowd and said, “It’s both spirited and comforting to note that America has heroes helping heroes.”

MOPH, Lafayette Chapter 504, has awarded the SWLVH with a new giant screen television for the last three years while under the previous leadership of Lloyd King. These generous gifts have been enjoyed by resident Veterans and their visiting family members in Wings 4, 3 and 1.

The new Commander, Ron Crowley, along with his most able Officers; Adjutant Danny Brown and Finance Officer Gary Stallhouts, assembled at the Jennings Home and presented another 55- inch TV to be mounted in Wing 2.

Commander Crowley told the assembled resident Veterans, their attending family members, employees and visitors that they wanted to complete Lloyd King’s vision of providing another source of entertainment for our Veterans before addressing another Community project.  “We are excited and happy that to be able to fulfill a need for a larger television for more viewable entertainment to this last Wing and happy to hear favorable comments from Veterans about the 504th’s efforts to support them.”

“I commend MOPH, Lafayette Chapter 504, for their community spirit, their commitment and dedication to their charter and their acknowledgment of their fellow Soldier, Sailor, Marine, Airman, Coast Guard and National Guardsman with a gift that educates, enlightens, and entertains the residents at the Southwest Louisiana Veterans Home,” said Stricklnd. “Well done!”