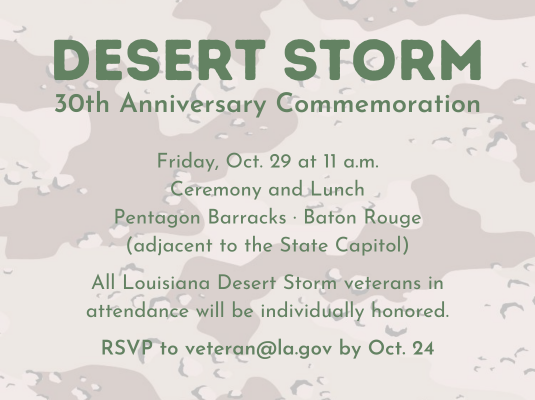 BATON ROUGE, La.—The Louisiana Department of Veterans Affairs will host the Desert Storm 30th Anniversary Commemoration on Friday, Oct. 29 at 11 a.m. in the courtyard of the Pentagon Barracks in Baton Rouge. Major General Bennett Landreneau, former adjutant general of the Louisiana National Guard, will be the keynote speaker at the ceremony followed by lunch on the grounds.

“It is our great honor to recognize Louisiana’s Desert Storm veterans upon the 30th anniversary of that conflict,” said LDVA Secretary Joey Strickland, COL (USA Retired). “Each Desert Storm veteran who attends the ceremony will be honored individually for their service and sacrifice to our great nation.”

Operation Desert Storm was the first major foreign crisis for the United States after the end of the Cold War beginning on Jan. 17, 1991 as a 42-day U.S.-led air offensive. Approximately 697,000 U.S. troops took part in the war of which 299 lost their lives. From the Louisiana National Guard, 1,812 soldiers from nine units deployed with another 6,600 LANG soldiers federally mobilized.

Please RSVP to veteran@la.gov by Sunday, Oct. 24 to attend in person. If individuals cannot attend the event in person, it will be streamed live via LDVA’s Facebook page and via Zoom at https://us06web.zoom.us/webinar/register/WN_eAqIiEazQ7e4hD6lnFOAQg.