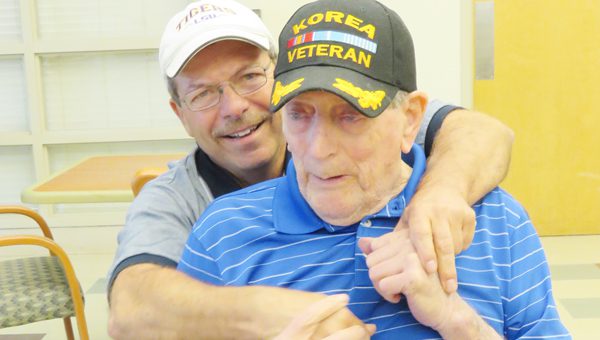 RESERVE — Maitland “Calie” Faucheux Jr. never got to see battle during the Korean War. Trained and ready at Fort Houston in San Antonio, the conflict ended before he could be shipped out.

“He had all his shots and was ready to go,” said his son, Maitland “Spuddy” Faucheux III. “Then everything was over.”

These days, Calie and Spuddy are waging a different kind of war.

In 2005, Calie was diagnosed with Alzheimer’s, the most common type of dementia, impacting memory, thinking and behavior in its sufferers and heartbreak for their family members and friends.

Now a resident of the South Louisiana Veterans Home in Reserve, Calie is one of 38 people in the Memory Care Unit designed for patients with various forms of dementia.

He has very rare moments of clarity, but he enjoys socializing in the cafeteria, listening to music, eating Tootsie pops and going outside.

His favorite thing to do is ride in Spuddy’s Mustang convertible.

Spuddy, who lives and owns a restaurant in Vacherie, visits his father every day during the week and as often as he can on weekends. He has become a favorite of the staff for his volunteer work, his fundraising and his leftover food from the restaurant.

Calie no longer recognizes him, though.

Now Spuddy is sharing his knowledge with other caregivers, hoping to help them find peace and assuage the inevitable guilt that comes with taking care of elderly parents.

“I go whenever I can,” Spuddy said. “If somebody invites me, I’ll go.”

Earl Mannina, the president of the LaPlace Chapter of the AARP, has invited Spuddy to speak to his group this summer.

“Well, he’s such a good speaker just on any subject,” Mannina said. “We’re all elderly at AARP and it’s a real hot topic right now, so I wanted him to come talk to us about it.”

Spuddy and his family had evacuated to the Vacherie restaurant for Hurricane Katrina when Calie first started showing signs of dementia.

“He kind of went crazy,” Spuddy said. “He was, like, ‘What are we doing here? Who are all these people? Let’s go home.’”

Just hours after another son took him to see his house in St. Rose, Calie asked when he was going to go see it.

Things got worse from there.

One day Calie rode his bicycle nearly five miles from home. Another day police found him walking his dog in the middle of the street.

After several years of doing her best, Calie’s wife, Inez, had to bring him to the Veterans Home. She died about a year later.

“My mom basically fought this battle alone,” Spuddy said. “What happens, when you get Alzheimer’s, you suddenly don’t get as much company as you used to get. Everybody gets scared. They don’t know what to say. Alzheimer’s basically killed her. That’s what it does to the caregiver. She used to tell me, ‘I sleep with one eye open.’”

Spuddy tells caregivers what signs to look for — changes in behaviors, changes in routines, repeating things, forgetting things. He talks about prevention and the things he has seen that can help, such as socializing and getting outdoors.

“They have to stay social,” Spuddy said as his father sat enjoying a Tootsie Pop at a cafeteria table with other residents and staff one afternoon. “Music calms them. Being outside, the stimulus, helps them. They have to stay active.”

After that, though, it’s all about the caregiver.

“Once they have Alzheimer’s, there’s nothing you can do,” Spuddy said. “There’s no cure, no turning back. You can make them comfortable, but you can’t change their life. Then it’s your life. You have to take care of yourself. He’s as happy as can be here.”