Life After War: Adjusting to the New Normal 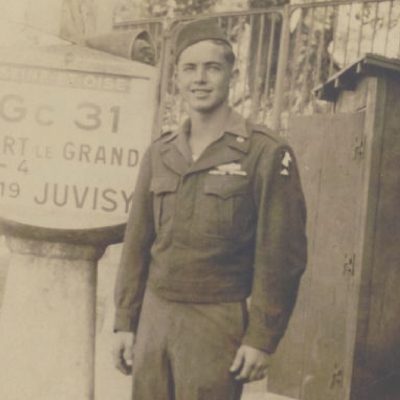 William V. Hines is a simple man with an extraordinary story that starts in small Louisiana town and leads to redemption through service. He is a resident at one of the five state-of-the-art Veterans homes that Louisiana Department of Veterans Affairs (LDVA) operates, and he is an inspiration to those who have the honor of meeting him.

Hines was born on Feb. 22, 1926 in the small town of Ruby, Louisiana. Ruby is an unincorporated community in Rapides Parish. His parents, Truley and Evie Greer Hines, were farmers on a 40-acres farm. He and his three siblings, Arley, Odessa, and Barbara, had a good childhood. “My favorite thing to do growing up was riding a bicycle,” he says.

Like many Americans at the time, Hines was drafted into the United States Army at the age of 18. America was at war, and, due to the Selective Training and Service Act that the United States instituted on Sept. 16, 1940, all men between the ages of 21 and 45 were required to register for the draft.

Once the U.S. entered WWII, draft terms, like the one Hines was subjected to, were extended through the duration of the fighting.

According to the National WWII Museum, by the end of the war in 1945, 50 million men between eighteen and forty-five had registered for the draft and 10 million had been inducted in the military.

Hines spent 17 weeks at Camp Fannin, located near Tyler, Texas, for basic and trainings. Camp Fanning was a U.S. Army Infantry Replacement Training Center and prisoner-of-war camp. It only operated for four years before being inactivated in 1946.

In late September of 1944, he was sent to Fort Leonard Wood to prepare to go into the battlefield. Fort Leonard Wood is a United States Army installation located in the Missouri Ozarks originally established to train infantry troops.

On Dec. 5, 1944, “we were sent to Boston and sailed on the USS West Point – SS America.”  The stated mission of the USS WEST POINT was simple and to the point, “The safe transportation of troops and equipment to their destination.”

“We boarded the French train referred to as the “40 x 8” because of the 40 Soldiers or 8 horses it carried,” says Hines. That train brought them to the Rhine River where they spent the day before being trucked to a town called Wingen-sur-Moder, France.

According to History.Net, outwardly, Wingen-sur-Moder (Wingen on the Moder River) was just a typical French village nestled in the Hardt Mountains. But it was here that GIs of the 70th ‘Trailblazers’ Infantry Division engaged in some of the most intense combat of the Alsatian campaign.

On Jan. 2, 1945, the Germans invaded and took the town. It took 7 days to retrieve it. According to Hines, “the weather was the coldest Germany had in 50 years.”

“I would say the hardest thing we faced was the freezing weather, the snow keeping our feet cold all of the time, the poor rations that led to hunger a lot of the time, the sleep deprivation, and the immense sense of loss for our fallen,” says Hines.

He goes on to explain that the sleep deprivation was mainly caused by their abnormal shift work. “There were 2 people to a foxhole,” he explains of his time in battle. “One of us had to stay awake while the other slept in two-hour shifts.”

Hines says his unit also endured a multitude of casualties which took a toll on everyone. “We suffered 99 wounded, 29 killed, and 129 that were sent to the sick line duty,” he recalls. Unfortunately, they only had 225 replacements to fill those much-needed vacancies.

He says he felt great sorrow from the loss of his comrades in a battle that lasted 86 days.  “The Germans finally surrendered on May 8, 1945, but our elements took more losses than they did.”

Although the battles were tough, Hines says he did experience some memorable moments. “I was first scout and M1918 Browning Automatic Rifleman,” he says proudly.

“I led a 600 man Battalion for three miles at night through German lines through two mined areas to the Saar River at night with the captain and his camper,” says Hines.

“We arrived at the Town of Furstenhausee, France on the Saar and captured the town without firing a shot,” he recalls.

For his heroic actions, he received a Bronze Star.  “After the Germans surrendered, we did ‘occupation’ until we had enough points to come home.” He went home in March of 1946.

Hines met his wife, Pauline, prior to being drafted into the Army. They fell in love, and “three months later, before I joined the Army, we married,” he says.

William and Pauline enjoyed 68 years of wedded bliss together. “We had three sons and one daughter,” says the doting father.  Their names, in order of birth, are: Bill Hines, Sue Hooter, Ronald Hines, and Byron Hines.

“I was a bread salesman for Cotton Brothers Bakery for 14 years,” says Hines of his time after the military.

He eventually moved to Bossier City where he managed the first nursing home there and spent 39 years plus as their Administrator.

In 2016, after breaking his hip in a fall, he was admitted to the LDVA’s Northwest Louisiana Veterans Home (NWLVH). This was a bittersweet move for him because his beloved wife had passed away while a patient at the home back in 2012.

“I have made many friends and enjoy playing bingo,” says Hines. “I also spend a lot of time searching through the computer.”

He is a wealth of knowledge when it comes to military history, specifically WWII. “I have done many interviews while living here at the home,” he says. He enjoys talking to the many groups that stop by to visit the NWLVH residents. He says some of the regular visitors want to hear WWII stories. “I have done a lot of research about WWII and gladly share it with those who are interested,” says the man who also lived through the war.

Hines is very open about his personal experiences and reasons for wanting to serve his community. Like many Veterans, he struggled while adjusting to his new normal after the war.

“I came home and returned to my job, but it took quite a while to adjust back to normal,” he confides. “Everything from sudden noises, to nightmares, and even those well-meaning unexpected pats on the back,” would bother him in ways they had not beforehand.

“I still re-live many of the things I experienced,” he says.  “The loss of two of my good friends, the close calls with snipers, the booby traps, and being knocked flat on my back by artillery shrapnel hitting me on front of my helmet (no damage done),” are some of the things he will never forget.

“I did receive a bronze star for the night I led the battalion through enemy lines to the Saar River,” he says nonchalantly. He also earned his Combat Infantry Badge and The Order of the Legion of Honor, which is France’s highest distinction.

The awards and recognition are not what motivated him though. It was a lot more personal than that. “One night in a fox hole, I was feeling very low and helpless,” he recalls. “I asked the Lord if he would let me get back home safely I would serve him,” and serve he did.

“I was called upon to be the administrator of the nursing home our church was building,” he shares. “I accepted the offer without hesitation and worked 39 years as an administrator where I found my place to serve Him.”

You can’t ask for much more than that. 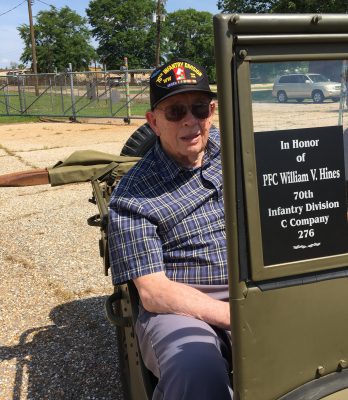