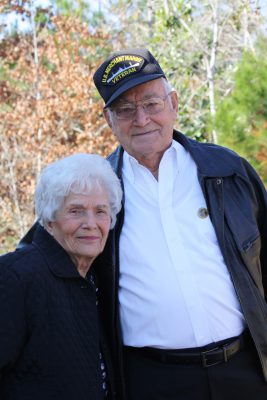 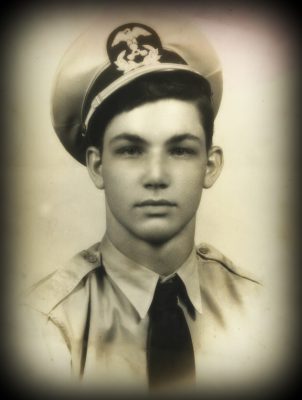 Merchant Marine from Leesville Remembered for Service and Love of Family

Alton Billingsley “A.B” Kay was born on Jan. 11, 1926 and, after a long and full life, he became the first Merchant Marine to be buried at the LDVA’s Central Louisiana Veterans Cemetery.

A.B. was born and raised in Vernon Parish, Louisiana. He and his five siblings worked on the family farm and helped his parents, Moss and Mattie Kay, survive the years of the Great Depression.  At the age of 16, he graduated from Leesville High School.

In 1944, he joined the United States Merchant Marine where he served as an oiler on tankers and general cargo ships until the end of the war.

A.B. shared various Mariner memories with friends and family. He specifically recalled boarding the S.S. Joshua Hendy in Westwego on June 28, 1944 when he first shipped out as an oiler.

According to him, they were in port for approximately 10 days loading mules, feed for the mules, railroad engines, tanks, Army equipment, and 90,000 cases of beer. He jokingly admitted that they did not make it to their destination with all of the beer because some of the crew hid a “sizable quantity” of the beer in the ships cofferdam.

His service in the Merchant Marine took him to the Atlantic, Pacific, Mediterranean, and Indian Oceans in support of the military war effort. After being honorably discharged from the Merchant Marine, he earned his engineer license and continued working on ship and eventually started his own business.

A.B. was married to the love of his life, Marie (Jeane) Kay, for 70 years. They raised two children together, son Ennis and daughter Penny. They eventually had five grandchildren and six great-grandchildren to round out their beautiful family.

He had a passion for airplanes and for fishing, especially trot lining for catfish. A.B. earned his private pilot’s license and was the proud owner of two airplanes. He also stayed active in his community through various volunteer efforts, including Wreaths Across America.

“Volunteers from the different branches of the service make it more meaningful when placing the seven memorial wreaths for our Wreaths Across America program,” Carol Martin, Interim Director, Central Louisiana Veterans Cemetery.  “Veterans like Mr. Kay make an impact on the people in attendance, especially since there are very few Merchant Marines in the area.”

Rest in peace, Mariner. We have the watch now.