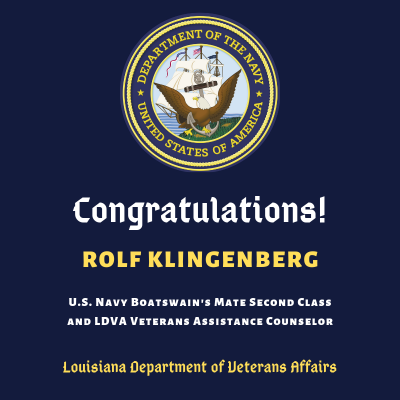 BATON ROUGE – “Just the facts, Ma’am. Just the facts.” While that catch phrase was popularized by fictional character Detective Joseph “Joe” Friday in the Dragnet series, it is also the type of no-nonsense approach that Louisiana Department of Veterans Affairs (LDVA) Veterans Assistance Counselor Rolf Klingenberg lived by when assisting thousands of veterans and their families over the course of his illustrious career.

Rolf Klingenberg is retiring from the LDVA after almost 21 years of service to Louisiana’s service men and women, it veterans, and their families and dependents.

U.S Navy Boatswain’s Mate Second Class Klingenberg was well prepared for this position after being assigned a myriad of duties while in service to our country.

Since this rating is kind of an all-purpose position, the duties are varied and tend to cover work not assigned to other ratings. Boatswain’s mates may serve as helmsmen and lookouts, or stand as security watches (both in port and at sea), or serve as part of a damage control, emergency or security alert team.

This particular set of skills came in handy once Klingenberg came to work as a Veterans Assistance Counselor (VAC) for the LDVA on July 20, 1998. Since then, his leadership, commitment to helping veterans, and tremendous amount of knowledge gained while assisting Louisiana military families with compensation and pension claims has left a lasting impact on those he has trained and assisted.

“Rolf has had a tremendous impact on the lives of the countless veterans and dependents he has served over the years, as well as the service officers lucky enough to work with and learn from him,” says LDVA Deputy Assistant Secretary of Benefits Vanessa J. Melancon. “He will definitely be missed.”

LDVA VAC John Miller recalls being trained by Klingenberg for about one year beginning in November of 2009. Miller had chosen to apply for this position after Ernest “Butch” Miller, who was retiring from the Bogalusa office, had contacted him about the position.

“My service-connected disabilities made my previous line of work impossible, and I felt working as a VAC would be a rewarding way to help other veterans,” he says.

According to Miller, Klingenberg was tough but fair. “He taught me to always be organized and to do things the same way so the next person could understand what had been done and could take the claim from there if needed.”

“Rolf always was willing to go above and beyond what was required in order to help a veteran and/or a claimant,” says Miller. “In my opinion, he is the best person to train new VAC’s that I have ever seen. He has forgotten more about this business than I will ever know, and I feel very fortunate to have been trained by him.”

Miller, however, admits that Klingenberg is direct and means business. “Once you get past the gruff exterior and his OCD, you find a person who is genuinely concerned and cares greatly for the people he is friends with,” he says. “Rolf has, however, no tolerance for nonsense and lets people know that if they want his help, they need to do things his way.  You are never in doubt where you stand with him.  We need more people like Rolf!”

“One of the most important things Rolf taught me is to do my best to develop a good rapport with the veterans that come into the office,” says LDVA VAC Darlene Graves who is a retired U.S. Air Force Chief Master Sergeant.  “Also, he taught me to always check to make sure that you take care of all benefits they may be eligible for at that particular time. We can’t always achieve what the veteran wants, everyone is not going to get 100% service connection, so try to send the veteran away with something positive even if it is as simple as requesting their military records or their medals.”

Graves says she came to the realization that having two service offices with three VACs in St. Tammany Parish is the result of a great deal of hard work and dedication that all began with Klingenberg.  “Over the years the Slidell office has been a place that veterans refer their friends to, even when they do not live in the parish,” she says. “It was not unusual for veterans to travel across several parishes just so they could have Rolf work with them on their claim(s).”

“Rolf Klingenberg is one of the hardest, if not the hardest working, counselors I have seen in 20 years,” says LDVA Southeast Regional Manager Dave Holcombe. “He has also been an excellent trainer of new counselors and there is no one I would rather send a new hire to for training than Rolf.”

Thanks you for your service to our state, country and our military community, Rolf! We wish you all of the best in your retirement from the Louisiana State Civil Service system.