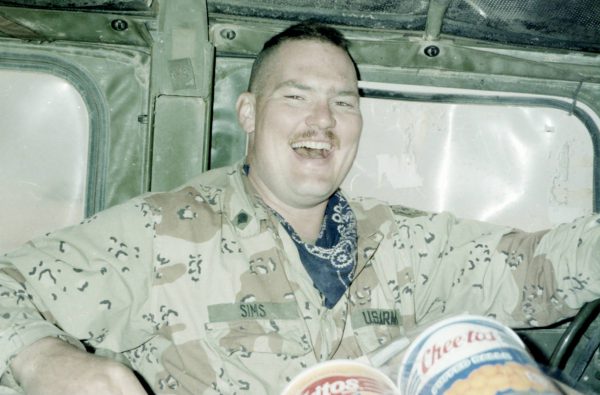 BATON ROUGE – U.S. Army SPC Robert Thomas “Tommy” Sims has earned a reputation for being a dedicated public servant and a friend to all he meets. Few people, however, know that Sims’ joie de vivre came at a cost after having lived through one of the fiercest tank battles in military history during the Battle of 73 Easting.

Sims was born in Rayville, La., to William and Charlotte Ann Sims. His father was a decorated WWII Army Captain and combat engineer, who worked his way up in the Louisiana Legislative Auditor ranks and became the northeast Louisiana supervisor for that region.

His mother taught elementary school second grade for 30 years. She kept the Sims children, Eddie, Ann, and Tommy, busy with schoolwork, chores, allowed plenty of time to play games, and was always making sure they knew how much they were loved.

“My Dad inspired me to join the military,” says Sims of his decision to enlist. “He was a motivating factor, but being of service was also something I felt was my duty. Everybody should be a part of something bigger than themselves.”

“The members of this team never cease to amaze me,” says LDVA Secretary Joey Strickland when briefed on what Tommy and his unit did during the Gulf War. “This is the caliber of selfless people that we have working all across our state. They don’t do this work for the paycheck, they do it because they care about the veterans that came before them, the service members that are still protecting us all across the world, and the veterans that are coming up the ranks and will need our help and support in the future.”

Sims was not a traditional soldier. In many ways, Sims was light years ahead of his fellow brothers-in-arms because he’d already obtained his bachelor’s degree from Northeast Louisiana University, and had worked in the insurance business.

In fact, Sims had even been commissioned as a 2nd Lieutenant in the U.S. Army Reserves prior to enlisting in the active-duty force on Jan. 24, 1989.

“Fort Knox was a challenge,” admits Sims who turned 29 while in basic training. That did not stop him from achieving his dream of becoming a 19 Delta or cavalry scout. “I mean, if you ain’t cav, you ain’t s***!”

According to the U.S. Army, the cavalry scout is responsible for being the eyes and ears of the commander during battle. They engage the enemy in the field, track and report their activity, and direct the employment of weapon systems to their locations.

Sims was attached to Alpha Troop, 1st Squadron, 2nd Armored Calvary Regiment, and based out of Bindlach, Germany.

“It was a great experience,” says Sims of his time spent abroad. “But it was obviously a very different culture than the one I grew up with.”

“We patrolled 730 kilometers of the international border between West Germany and Communist East German/Czechoslovakia,” says Sims. “I was there when the Berlin Wall was up, and I was there when it came tumbling down. It was pretty surreal.”

Not long after that, Sims said that he and his buddies were watching the American Forces Network AFN in their barracks when Gen. Colin Powell came across the programming and said that his unit was deploying.

“I had my PCS (Permanent Change of Station) orders in hand, but in Nov. 1990 we were sent to Iraq instead,” he says with a straight face.

“Adapt and overcome” is a mantra that’s instilled in members of the military early on so the complete change in climate that he was exposed to didn’t faze him. “When we left Germany, there was maybe two to three feet of snow on the ground. But, when we landed in Dhahran, Saudi Arabia, we were hit with 110 degree heat.”

Sims and his team would have to adapt quickly because the air war started on Jan. 16, 1991, and things were about to get real rough, real quick. Following six weeks of the U.S. Air Force bombing the Iraqi Army, the ground war began on Sunday, Feb. 24, 1991, when U.S. forces crossed into Iraq.

“A lot of people that served during the Gulf War have no idea what happened or what the Second Armored Cavalry did at the Battle of 73 Easting,” says Sims. “I want them to know.”

“I kept thinking, Lord, this is bigger than me.  If you’re ready for me, I’m ready for you,” says Sims of the time he spent in one of the most epic tank battles in history.

Sims says he knew that the only way to go home is to get through this battle because there was no other option. “It’s kind of like playing football, you don’t have time to think – you just do what you were trained to do.”

“They shot at us first, so we engaged the enemy,” says Sims. “Everything was happening so fast.  It felt like a training exercise with live ammunition, but we destroyed them.”

For their actions on that fateful day, Sims and his entire unit received the Valorous Unit Award. The citation reads: For extraordinary heroism in action against the Iraqi Army during the period of 23 Feb 91 – 26 Feb 91. The 2d Armored Cavalry Regiment, with its attached Operational Control and direct support units – the Dragoon Battle Group – attacked into southern Iraq, in the lead of VII Corps with such audacity that the Dragoon Battle Group quickly overwhelmed superior enemy forces, demoralizing them, and taking hundreds of enemy prisoners. On 26, Feb., during the Battle of 73 Easting, the Dragoon Battle Group established contact with the Tawakalna Division, Iraqi Republican Guards Corps, and decisively defeated their advanced elements as well as elements of other Iraqi armored units, effectively fixing this superior enemy force so that the Corps could maneuver against and destroy them. Throughout this 96 hour period, the 2d Dragoons Battle Group displayed intrepidity in combat that clearly set them apart from other combat units in the VII Corps. Its actions reflect the greatest credit upon the soldiers of the Battle Group, and are in keeping with the highest traditions of American military service.

“I love America,” he says with pride in his eyes. “I wanted to do my duty in order to protect her. It wasn’t always easy, it sometimes sucked a lot, but I’m glad I did it.”

“Serving in the Army is one of the best things I ever did,” says Sims.  “It wasn’t about me.  It was about something much bigger than me.”

Sims was honorably discharged in January of 93, and, shortly afterwards, he came to work as a Veterans Assistance Counselor with the Louisiana Department of Veterans Affairs on March 27, 1995, where he’s been helping his fellow brothers and sister-in-arms for over two decades.

His advice for future generation is that, “You can’t depend on others to do everything for you.  The only reason we have the freedoms we have today is because of the sacrifices of the generations that came before us.”