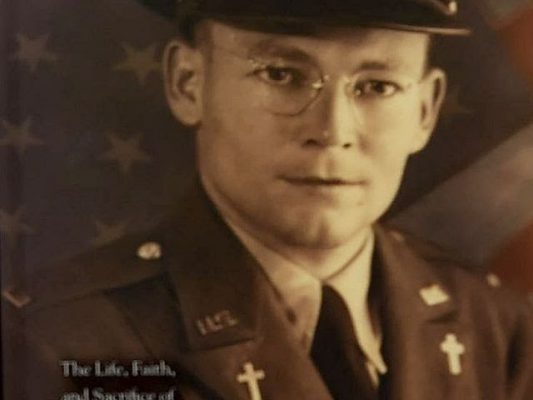 The exemplary spiritual life and heroic actions during combat of Rev. Joseph V. Lafleur were honored by religious and U.S. military officials on Tuesday morning when he was posthumously presented the Distinguished Service Cross and Purple Heart at a ceremony held at St. Landry Catholic Church.

U.S. Rep. Ralph Abraham presented the two military awards  — one for extraordinary bravery and another for wounds or death in battle  — to Lafleur’s nephew Richard Lafleur and his wife Carol Lafleur, in front of the altar where Lafleur, a Ville Platte native, celebrated his first mass in 1938 following his ordination.

Students from Opelousas Catholic junior high and high schools were seated near the front of the church where they heard Abraham, Deshotel and Brady present brief remarks about Lafleur’s life both as a World War II first lieutenant and chaplain and as a young priest, who served briefly as assistant pastor of Mary Magdalene Church in Abbeville.

After the conclusion of World War II, Lafleur was posthumously given an initial Distinguished Service Cross for his actions of administering spiritual and medical assistance of airmen at Clark Field during a Sept. 8, 1941 bombardment by Japanese aircraft.

Wyatt Lobrano District Director for the U.S. 5th Congressional District said in an interview on Tuesday that it is unusual and “extremely rare” to have one person receive two Distinguished Service Cross medals.

Greene said in a separate interview that only a few people that he can remember have been awarded the Distinguished Service Cross twice.

In his remarks during the ceremony, Lobrano said witnesses of Lafleur’s actions during his years as a prisoner of war beginning in 1942, state that Lafleur “administered to men of all faiths and that his attempts at intervention for better treatment on behalf of his fellow prisoner resulted in beatings by Japanese guards.”

As Lafleur stayed below in the hold of the sinking ship, Lobrano said eye witnesses reported that Lafleur exhibited “great effort and personal sacrifice in the face of grave danger.”

“He was the epitome of a good American and a godly man,” said Abraham. Abraham portrayed Lafleur as a man of action who was “a nation of defense against evil. His story is so touching,” he said.

Brady issued remarks on behalf of Richard and Carol Lafleur, whom he said were too emotional to speak themselves.

“What Richard and Carol wanted to say is to express their gratitude for all that have helped bring this day to this moment,” said Brady.

Brady said that Lafleur will always be associated with St. Landry Catholic Church and praised the efforts of Richard and Carol Lafleur continuing to get Father Lafleur’s story told.

Deshotel said Father Lafleur’s story gives persons an opportunity to “reflect on our own personal lives when we look upon a person like him. His faith and courage did not happen overnight.”

Lafleur’s values, Deshotel said, were nurtured as a young seminarian and then applied as a priest and chaplain.

“He (Lafleur) shows us to think outside of ourselves for the good of others,” said Deshotel. 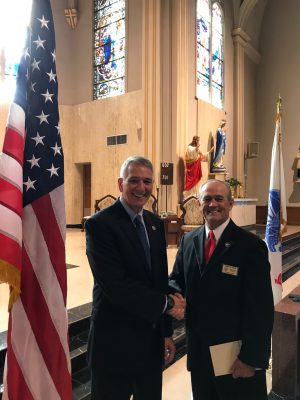