I’m No Hero: The Story of Russell M. Noss 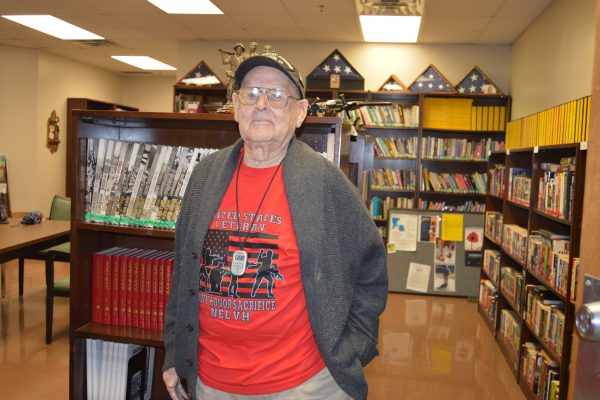 MONROE, La. – “Nothing in hell must stop the Timberwolves,” is the battle slogan that a Louisiana WWII U.S. Army veteran was taught and that helped him navigate through some challenging times.

Russell M. Noss was born in Elkhart, Indiana on May 7, 1925. Elkhart is a lively small city in the heart of rustic Amish country and his family lived humbly, but happily there.

Noss was the youngest of three boys and one girl born to Dorsey and Laura Noss. He describes his mother as a “strong woman.” She had to be as all three of her sons were drafted during WWII.

Noss recalls that he and four of his high school buddies were all “having an enjoyable time” during their senior year of high school until news came down that they were all being drafted. He tried asking for a two-week deferment so he could graduate high school, but it was rejected and he was inducted into the U.S. Army in Toledo, Ohio.

He recalls how his father was distraught about all of his sons going off to war that he tried joining every branch of service so he could be near his boys. Unfortunately, he was unsuccessful in his attempts and would have to wait for sporadic news through letters.

According to the Smithsonian National Postal Museum, military personnel felt the most connected to home through reading about it in letters. For members of the armed forces the importance of mail during World War II was second only to food. Civilians were encouraged to write their service men and women about even the most basic activities. Daily routines, family news, and local gossip kept the armed forces linked to their communities.

The Noss boys went their separate ways in the military as Russell was sent to Camp Atterbury near Indianapolis for his U.S. Army basic training, then set to first assignment in California with a search light unit. While he enjoyed it, he only stayed there for about six months.

Noss was then transferred to the U.S. Army 104th Infantry Division “Timberwolf Division.” “We were with this Latino General in Holland, Belgium, and Luxemburg, Germany,” says Noss. His name “de la Mesa” means of the table, you know.”

Major General Terry de la Mesa Allen Sr. commanded the 1st Infantry Division in North Africa and Sicily from May 1942 until August 1943. He was later selected to lead the 104th Infantry Division as divisional commander, a post he held until the end of the war.

His first assignment consisted of “swinging around the Siegfried marginal line.” The “Siegfried Line,” known in German as the Westwall, was a German defensive line built during the 1930’s opposite the French Maginot Line.

At 18 years-old, Noss was subjected to an unforgettable moment where he ended up losing his buddy and fellow Soldier. Noss recalls that, while they were both under sniper fire, Luke Frances McCacia, originally from New Orleans, was hit by a German 88 mm anti-aircraft and anti-tank artillery gun. “We were in the process of digging our foxhole when it happened,” says Noss. “Luke looked tired and we only had one shovel between the two of us so I offered to help him dig. This crazy German sniper kept shooting everything up so I just started digging quickly.”

Shortly afterwards, he says he heard three loud explosions. “Those explosions bounced me around like a rubber ball. But, Luke’s body took the shrapnel I should have taken had I not asked to do him a favor.”

Noss wanted to honor the memory of his fallen comrade by sharing this part of his story. He’s adamant that he’s never been one to suffer from depression or regret over what they did during the war. He also admits that he has never forgotten Luke. “My good deed ended with the death of my foxhole buddy.”

There was no time to stop and mourn his loss. His unit after all was trained as first night fighting unit in the Army. They were there for 11 months and held the longest solid engagement in WWII. “We cleared out towns, did what we were asked to do.”

Asked what it felt like to be away from home for the first time, Noss responds “you just follow their orders. The Army indoctrinates you. So you just know how to respond to their orders.”

On Dec. 15, 1944, while taking a prisoner of war back to command post, Noss’s life would again be dramatically changed when he kicked open the door of a suspicious building and was shot twice by a German soldier hiding inside. “Believe it or not, you do not feel a bullet wound.” He says matter-of-factly. “If you get hit, it will knock you to the ground though.”

One bullet passed Noss’s head, but the muzzle blast hit his face. One bullet went across the front of his throat and left two holes through his now buckled uniform.

He was flown to England to get the metal out of his eye and obtain medical treatment. “I missed the Battle of the Bulge by 5 days because of that,” he says with a bit of disappointment in his voice.

Noss’s division held the north flank, and, after surgery, he went back into battle. He stayed with his fellow Soldiers until July 1945 just north of where General Patton was at the time.

Noss was “mustered out of the Army after Hiroshima.” He says he never discussed his service once he got home. “It was just something that we all had to do, he says. “So, we just did it.”

When asked if he ever wanted to discuss what he’s been through with anyone, he said, “You can’t imagine the attitude that the home front had when we got home.” “So, we just put it all behind us and got back to our civilian jobs,” he recalls with some sadness.

After his service, Noss would try out various professions across the country while adjusting to his “new normal.”

We worked at Selmer Instrument Company for one year making clarinets. He then headed to California because he wanted to become an architect. He used his G.I. Bill to attend the University of California at Santa Barbara. Unfortunately, he got pretty ill and dropped out.

His father had moved to Rotunda Beach, California, and once fully recuperated, he joined in his father’s footsteps at North American Aviation (NAA) where he was an expeditor responsible for getting parts from one department to the next.

The NAA was a major American aerospace manufacturer and the one of the first companies to produce missiles. Noss recalls being able to hold the first parts of a rocket.

Noss would eventually marry Ethel in St. Joseph, Michigan. Together, they raised three daughters: Rebecca, Rhonda, and Renee. Noss worked in ministry for 60 years with the love and support of his wife of 56 years before her passing.

He’s lived at the Louisiana Department of Veterans Affairs Northeast Louisiana Veterans Home for 3 years now. His home church, the North Crossings Community Church, is across the street from there which he enjoys.

“Make sure they know I am not a hero,” says the straight-faced Purple Heart recipient as we wrap the interview. He may not consider himself to be one, but to those that have had the honor of knowing him, it is clear that this member of “The Greatest Generation” deserves our respect and admiration.