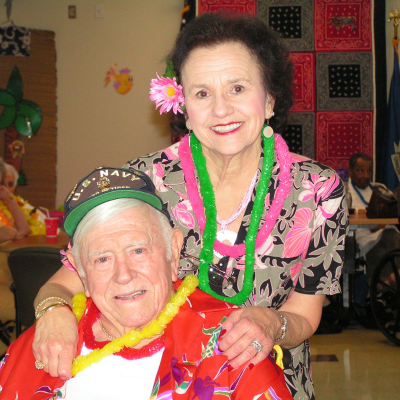 RESERVE, La. – “I can imagine no more rewarding a career. And any man who may be asked in this century what he did to make his life worthwhile, I think can respond with a good deal of pride and satisfaction: ‘I served in the United States Navy.”  ― John F. Kennedy

U.S. Navy Veteran Emile D. Hotard, Jr. was one such man. His pride and satisfaction in being of service to his country, state, community, and fellow veteran was apparent to all who knew him and had the honor of working alongside him over the years.

The Louisiana Department of Veterans Affairs (LDVA) Southeast Louisiana Veterans Home (SELVH) will be honoring the life of one of its biggest supporters during a Wing 2 Dedication Ceremony in memory Hotard happening at the Reserve, La., home at 2 p.m. on April 5.

“Our Department was blessed to have such a devoted supporter in Emile Hotard, and dedicating a wing is not only appropriate, it is a testament to his legacy,” said LDVA Secretary Joey Strickland.

Hotard retired from the Navy after serving on active- duty during WWII, the Korean Conflict, the Vietnam Era, and the Berlin-Cuban Crisis.

Once back at home, the lifelong resident of Reserve dedicated his free time to making the lives of his fellow Louisiana veterans better.

Hotard was instrumental in the establishment of the Southeast Louisiana Veterans Home, and continued to be involved in affairs at the veterans’ home until his death on April 1, 2016.

He organized the Veterans of Foreign Wars Post #5004, the local American Legion, and other veteran groups so they could join him in showing support for his vision of having a veterans’ home placed in his hometown. The SELVH serves over 93,388 veterans living in the southeast Louisiana region.

Those that worked with him on this project describe him as a kind soul who commanded a presence and response from you. His passion and dedication were infectious, and he was able to successfully advocate for the opening of the SELVH, the expansion of the church services it offered, and helped successfully fundraise for 75% of the funding needed to build the recreation building.

“A lot of us loved Mr. Hotard, and sought his approval in the work and care we provided to our residents,” says Villa Feliciana Medical Complex Long-Term Care Associate Administrator Paul Heistand who used to work for the LDVA’s SELVH.  “He was unofficially known as the Ambassador of our home.”

Hotard received his bachelor’s degree from Louisiana State University and his master’s degree from Ole Miss. He impacted many lives as a coach, teacher, principal, and director in the St. John the Baptist Parish Public School System.

He served for years as president of Emile Hotard Distributors, where he was affectionately known as the 7UP man.

He was an avid community volunteer serving as a former board member of River Parish Mental Health Clinic, a longtime member of the VFW, American Legion, Fleet Reserve Association, Louisiana Retired Teachers Association, a charter member of both the Reserve Volunteer Fire Department and the National World War II Museum, and was on the Bank of St. John Advisory Board and the Bank of LaPlace Board of Directors.

Emile D. Hotard, Jr.’s leadership, contributions, and passion for veterans and community service will not be forgotten. It is our hope that the residents and visitors to LDVA’s SELVH will walk down the halls of Wing 2 and continue to be inspired by his actions while remembering fondly the kind of man that he was.

The SELVH Wing 2 Dedication Ceremony in honor and memory of Emile D. Hotard, Jr. is free and open to the public. A small reception will follow.