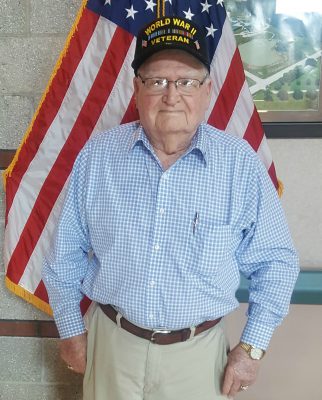 Henry H. Ratcliff enlisted in the in the United States Army in 1942 and served during WWII. He’s seen and done more in his lifetime than most can imagine. For the past two years, this living legend is now a proud resident of LDVA’s Southwest Louisiana Veterans Home located in Jennings, La.

“I served 3 years, 6 months and 8 days,” Ratcliff recalls of his time in service during the largest and most violent armed conflict in the history of mankind.

“We started out in the jungles of New Guinea,” he said. The campaign on New Guinea is all but forgotten except by those, like Ratcliff, who served there. “We just went from island to island doing what was needed.”

Battles with names like Saipan and Iwo Jima received more attention than the campaign on New Guinea. Yet Allied operations there were essential to the U.S. Navy’s drive across the Central Pacific and to the U.S. Army’s liberation of the Philippine Islands from Japanese occupation.

Ratcliff, who a was a drill instructor, weapons sergeant and a semi-truck driver, served under the direction of General Douglas MacArthur, the Southwest Pacific Area commander at that time. His efforts and those of many of his brothers in arms, helped to liberate the Philippine people.

“I wasn’t afraid of anything until right at the end of the war,” says Ratcliff whose unit was also involved in The Mindoro Campaign.

Gen. MacArthur issued orders for the invasion of Mindoro to help provide the Allies with airfields from which to cover landings at Lingayen Gulf on Oct. 13, 1944. However, several airfield construction delays and Japanese kamikaze attacks led to significant shipping losses on Leyte, delaying our ability to secure the air space over the Philippines.

“On that last convoy, they moved us around,” recalls Ratccliff of the risky and daring operation. “They started dive-bombing the kamikazes,” he said. “We knocked down about 65 of them, but they sunk 8 of our ships.”

After the war, Ratcliff moved to Orange, Texas. “I’d like to went nuts,” he says the time he spent transitioning back into the civilian world. But, he said he liked working on decommissioning ships while he was there.

Ratcliff says he got married while on 90-day furlough. He and his lovely wife moved to Cameron, La., and lived a great life there for 30 years while he worked for the Louisiana Department of Wildlife and Fisheries.

Sadly, after his wife passed away, he lost his purpose. “I was just walking the floors so I sold my home,” he says. “I knew I had to go somewhere.”

In 2015, he walked through the doors of LDVA’s Southwest Louisiana Veterans Home, where he found his new home and sense of purpose.

He spoke to the local Admissions Coordinator and agreed to take a tour of the facility. He says that as soon as he walked in the doors and was greeted by warm smiles and he thought, “Ooohh, I found me a home!”

“I love it here,” he said. “They take good care of me.” Ratcliff says that since he is a 70% disabled veteran, his residency did not cost him anything.

“They count my pills, help me shower, wash my clothes and I have some new friends here,” says the veteran who continues to serve and stays actively involved in the daily activities.