For this World Traveler, the Army was the Right Choice 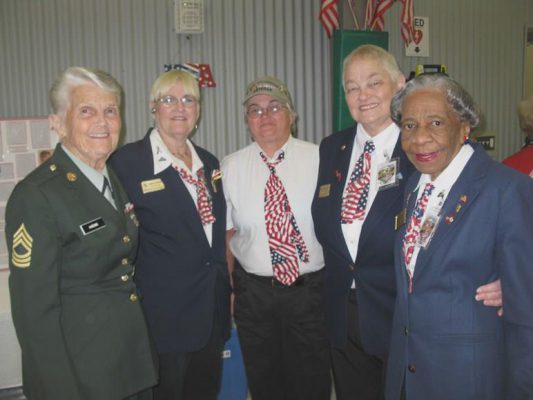 Doris Harding has been dreaming of traveling since the day she was born. Recently, Southeast Louisiana Veterans Home (SELVH) team members had the pleasure of sitting down with her to discuss her time in the service.

Harding, who is now a resident of the Louisiana Department of Veterans Affairs (LDVA) home located in Reserve, Louisiana, was born in Waco, Texas in 1939.

Waco is in the heartland of Texas situated on the I-35 corridor between Dallas and Austin. The city is the birthplace of Dr Pepper, the Texas Ranger Hall of Fame and Museum, and the Texas Sports Hall of Fame.

She is the daughter of Finis and Bonnie Harding. Her father was a “country preacher.”

Harding was the youngest of three children. “We traveled a lot going from church to church,” she recalls of her youth. “I remember vividly living in a tent by a flowing creek that we had to carry water from to use for cooking and cleaning.”

From there, the Harding’s moved to a house with no electricity, water, or window panes. “It was hard, but we did what we had to do,” she says of her early years.

Harding says her cousin Clifford Pinkston was the reason she joined the military. Clifford was a WWII Veteran and would come home to visit while wearing his uniform.

“I would grab his hat,” she says with a big smile. Then she says she would put the hat on and proudly exclaim, “I’m going to be a Soldier, too!”

Soon afterwards, her beautiful face is covered with a deep sadness as she recalls how handsome and nice her cousin had once been. With a crack in her voice she shares that he was killed in combat while serving in Germany just a few years later.

Harding attended high school in Buena, Texas, and was one of 55 students in her senior class to graduate that year.

After her high school graduation, she enlisted in the Women’s Army Corp and went to Fort McClellan in Anniston, Alabama, where she completed her basic training in 1958.

Fort McClellan was one of the largest U.S. Army installations and was known for training over half a million troops.

Presley once asked why her hair was so short and wondered if it was Army regulation. She smiled at her patient and said, “No, I just like it like this.” Harding remembered how Presley was always smiling and humming while in their office.

The WAC’s performed a wide variety of jobs that ranged from clerk to radio operator, electrician to air-traffic controller. Women served in virtually every theater of engagement, from North Africa to Asia.

It would take until 1978 before the Army would become sexually integrated, and women participating as merely an “auxiliary arm” in the military would be history. And, it would not be until 1980 that 16,000 women who had joined the earlier WAACs would receive veterans’ benefits.

A big military milestone occurred for Harding when, in January of 1976, she was transferred to Recreation Services and promoted to the rank of Master Sergeant.

Master Sgt. Harding was then reassigned to Berlin, Germany, where she worked as the Recreational Director at the Wannsee House.

The house was once owned by Adolph Hitler and is where the Wannsee Conference, which was a high-level meeting of German officials to discuss and implement the so-called “Final Solution of the Jewish Question” (mass killing) was held.

In 1992, on the 50th anniversary of the Wannsee Conference, the house became an official museum and educational centre. Harding spoke of the home’s extravagance. She was in charge of all the activities for the service men and women, which included an array of fun activities on the lake.

One of Harding’s favorite pastimes was driving her 1974 Convertible on the country side. She shared an amusing story of a time she hit a deer and the police gave the dead deer a “failure to yield” ticket.

Some of her most memorable moments in the military happened when she was stationed in Germany. One day, while out walking she came across the famous Glienicke Bridge where American pilot Gary Powers was exchanged for Soviet Colonel Rudolf Abel. Powers’ Central Intelligence Agency U-2 spy plane was shot down while flying a reconnaissance mission in Soviet Union airspace, causing the 1960 U-2 incident

At 8:52 a.m. on February 10, 1962, Powers walked across the Glienicke Brücke from Potsdam toward West Berlin in a carefully orchestrated handover; Abel crossed in the opposite direction. While the deal was expected to ease tensions between the Americans and Soviets, the Cuban missile crisis soon erased the memory of the diplomatic overture and brought the two superpowers to the brink of nuclear conflict.

Harding loved serving in the military and traveling. They took her all over the world and she has personally driven to every state in the country except for Maine and New Hampshire.

Once out of the military, Harding lived in Baton Rouge and worked for the State as a welfare worker before she transferred to Communicable Disease Control (CDC).

While working at the CDC, she says she was impacted by a lot of young people she met who contracted HIV. “It was terribly sad, and we did everything possible to help them.”

She arrived at the LDVA’s SELVH in July of 2017. Prior to being admitted to the veteran’s home, she thoroughly enjoyed community service and living in her own home in Ponchatoula, Louisiana.

Harding admits she wasn’t eating properly and kept falling due to her low blood pressure. She had a heart attack two years earlier, and she was told that can make you go into depression, and she believes that is exactly what happened.

When asked what she thinks about the SELVH, she smiled and said, “This place saved my life! I was on death’s door when I got here.”

Harding has made many great friends and enjoys going on outings. Her favorite outing so far was the trip to the Smoothie King Center in New Orleans. “Dow Chemical provided us with our own suite, and all the food and drinks we wanted. We watched the New Orleans Pelicans whip up on the Boston Celtics. It was great!”

She says she also loves going to the beauty shop. “We have a great stylist, and we always have fun in there,” she says.

Our selfless hero ended our interview with this piece of advice, “To someone wondering what they want to do with their life, join the military. It’s a great plan! Service is a great way to give back, further your education, and find a career.  I loved it for 21 years.”