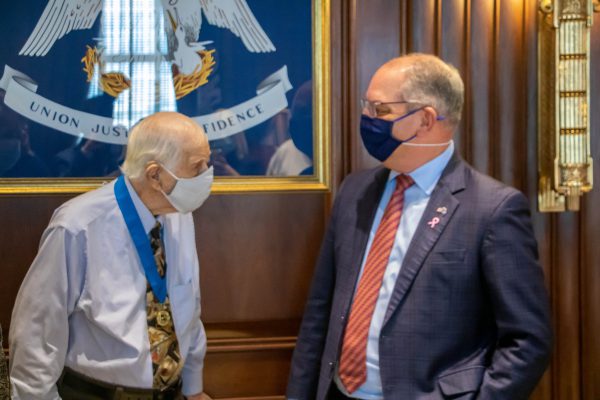 On Oct. 17, 2020, Eugene Lussan, a decorated World War II veteran, celebrated his 100th birthday. Staff from the Louisiana Department of Veterans Affairs joined Gov. John Bel Edwards and members of both the Louisiana House of Representatives and the Louisiana State Senate to honor him for his service and extend best wishes.

Born in the French Quarter in New Orleans, Lussan later moved with his family to Gentilly. After graduating from college, he joined the Louisiana National Guard in 1939 where he would serve in the 106th Medical Regiment at Jackson Barracks before being called to active duty.

Lussan’s storybook service began at Camp Blanding in Florida, and after being sent to numerous training camps, he shipped out to North Africa and then to Morocco. As a medic, he was transferred to the 757th Tank Battalion and the 473rd Infantry Regiment and was one of the very few to serve in both units.

Two years of Lussan’s service was spent storming the beaches of Southern Italy and participating in the liberation of Rome where his unit fought German soldiers forcing them back to the Alps. He saw action from a Higgins boat, a tank and on foot and fought for 58 days in the same clothes while living in trenches. Lussan went on to describe how his unit watched in awe as nearly 3,000 planes from the United States flew overhead signaling the beginning of the end of Nazi control in Italy.

One day in the city of Genoa, Lussan recalled handling a phone that didn’t work well. After a while, he picked up the receiver and began to say hello. At once, a voice replied asking who was on the line. As fate would have it, the man on the other line was a German commander of a 5,000-man unit asking to speak to an American commander in order to surrender. So, Lussan’s claim to fame is that he single-handedly helped capture thousands of Germans!

Lussan was later “loaned” to Gen. Charles de Gaulle’s French expeditionary force as a result of his outstanding medic skills, combat tenacity, selfless service and love of country. For his participation in the liberation of France, he earned the most prestigious medal, the Croix de Guerre, which was established in 1802 by Napoleon Bonaparte and is France’s highest military honor.

It is men like Lussan who have served in an exemplary manner and whose military service is a story of sacrifice and courage. We at LDVA honor him, and all Louisianans who have served as well as those who are serving.