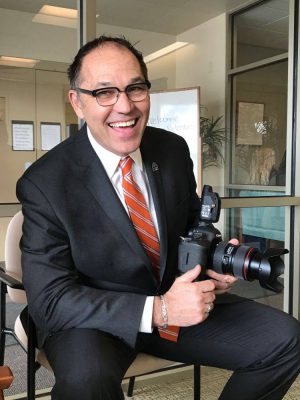 Gene Russell knows what it means to serve. He’s currently a photographer for the U.S. Department of Veterans Affairs (USDVA), primarily photographing Secretary of Veterans Affairs Robert Wilkie, his guests and his events in the nation’s capital. Russell, with his jovial personality, jokes and says, “I’m kind of a big deal!” He also honorably served our nation in the 3rd Infantry Division in Wildflecken, Germany, and is a service-connected disabled U.S. Army veteran. But he wasn’t the only member of his family to serve. His father, uncle, three brothers and sister served, and Russell says his military hero is his big sister, retired USN CPT Debra Duncan. Having his sister as his military hero, Russell knows the importance of the roles of women serving in our Armed Forces.

Several years ago, Russell met Liz Estabrooks who was then working for the Oregon Department of Veterans Affairs. She had captured and displayed a small collection of black and white images of women veterans and had been invited by a member of Oregon’s congressional delegation to bring them to the Russell Senate Building in Washington, D.C. Intrigued by the stories of those women veterans, the I Am Not Invisible (IANI) project was born.

IANI, under the auspice of the Center for Women Veterans at the USDVA, is now a national campaign featuring a photo collection honoring the service of America’s women veterans and acknowledging their diverse contributions in military service and beyond. Russell has traveled the nation meeting servicewomen in 45 states, 63 cities, the District of Columbia, Puerto Rico and 25 Indian Tribes and Nations to capture more than 2,600 photographs painting a picture of women in service.

On Aug. 3 and 4, Russell made stops in both Baton Rouge and New Orleans. The Louisiana Department of Veterans Affairs (LDVA) was honored to partner with the federal VA on this project to showcase Louisiana’s women veterans. The photographs are available for viewing at https://www.facebook.com/media/set?vanity=VAWomenVets&set=a.2400316580272727.