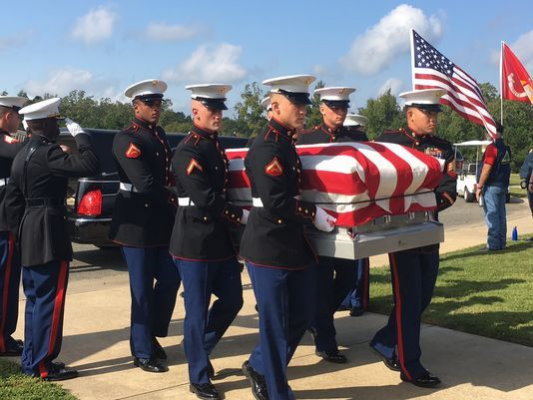 Cpl. Raymond Clark Snapp is finally at rest, 74 years after his death.

In October 1941, the young man from a small town in northeast Texas enlisted in the U.S. Marine Corps just two months before the attack on Pearl Harbor.

Snapp was later injured in the Battle of Guadalcanal and taken to Honolulu to be treated for his injuries, but he refused to go home, said Lt. Sterling Claypool, U.S. Navy chaplain.

“He wanted to return back with his Marines,” Claypool said.

Then, on Nov. 20, 1943, Snapp “waded into the water with no hesitation” as his unit landed at the small island of Betio in the Tarawa Atoll of the Gilbert Islands, Claypool said.

“He took the beach, and he gave his life for freedom,” Claypool said.

Snapp, 24, was one of 1,000 Marines and sailors who died in the Battle of Tarawa, in an attempt to secure the island against Japanese resistance.

It would be many decades, though, before Snapp could reach his final resting place.

Beginning in 1949, Snapp’s unidentified remains rested with the Battle of Tarawa Unknowns in Hawaii.

Due to advancements made in scientific technology, and the collection of DNA Family Reference Samples, the Defense POW/MIA Accounting Agency was able to exhume 94 sets of remains buried as unknowns at the National Memorial Cemetery of the Pacific last fall.

Snapp’s remains were finally identified this past July, and his closest living relative was contacted in Shreveport.

On Friday, a burial service with full military honors was held for Snapp at the Northwest Louisiana Veterans Cemetery as he was finally laid to rest in Keithville.

“Growing up, we had just heard about him and knew that he had died,” said Brent Snapp, a second cousin from Lubbock, Texas. “It was pretty shocking for us to find out that he was coming home and that they had found him after 74 years.”

David Swearingin, a second cousin from Houston, said his mother helped make the connection to Snapp by providing the DNA match for identification purposes.

“I think she is very proud that she helped make the connection,” he said. “I was just amazed that the military would go through this process to find a relative.”

Snapp’s remains were flown from Hawaii to Texas, then escorted from Dallas-Fort Worth International Airport to Osborn Funeral Home in Shreveport on Thursday.