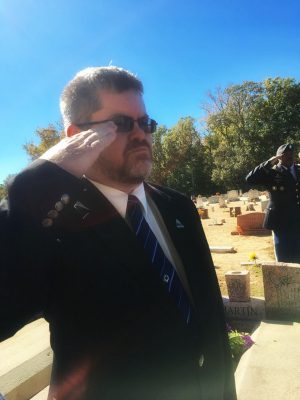 On Nov. 18, 2016, U. S. Army SGT. James Martin was given a hero’s welcome and final salute in his hometown of Anacoco, La., where one of LDVA’s team members was there to pay final respects to the cousin he never knew.

SGT. Martin was born on May 23, 1931 to Felton Glen and Meldredge Peace Martin. He graduated from Anacoco High School and in 1949, enlisted in the U.S. Army.

While serving in the 31st Infantry, Corporal Martin died while under attack from the Chinese Army in the Chosin Reservoir. His family was notified on Dec. 3, 1950, that he was missing and on Dec. 3, 1953, he was declared deceased. He was posthumously promoted to the rank of Sergeant.

According to West Central’s Best, for years after the announcement of his death, his mother would stand on her porch watching to see if he would return home down the road he left. She passed away continually hoping to see him return home.

“It was important for me to be there as an LDVA representative, as a fellow veteran and as a family member of a local hero. I never had the opportunity to meet James but I’ve heard a lot about him as his father and my grandmother were siblings. And, I’m honored that I was able to finally welcome him home.”

SGT. Martin’s family wishes to express their gratitude to the Joint Readiness Training Center service members from Fort Polk and to the 10th Mountain Division Soldiers that participated in the procession, the funeral and those who took the time to honor the memory of SGT. James Martin.

The family also wishes to thank the Vernon Parish Community for playing a huge part in this homecoming event. Emergency Services escorted the procession and lined Highway 171 from Rosepine all the way to Hornbeck where residents, school children, and local fire and police agencies all stood and cheered for a local hero who gave his life for our freedoms during Korea.

“A hero is someone who has given his or her life to something bigger than oneself.” –Joseph Campbell 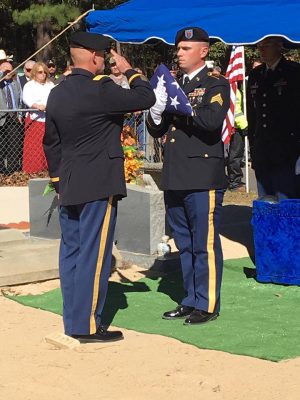